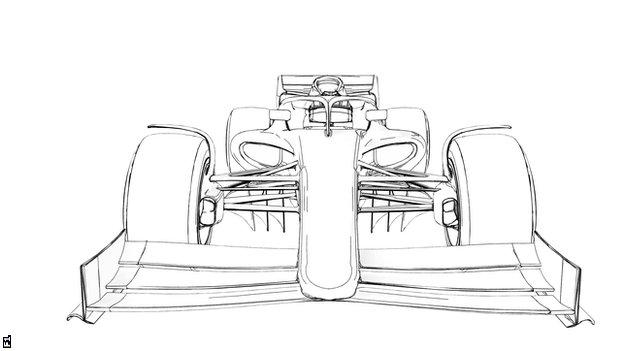 Design offices in Formula 1 teams, such as the one I work in as a senior aerodynamics engineer, face a tricky balancing act at this time of year.

There is still some work going into the last few end-of-season car upgrades, but the vast majority of our efforts are now on next year's car. It's a trade-off we've been playing with for some months now, actually.

There is always the temptation to roll the dice and switch development to next year's car early on in the season, hoping to jump up the grid.

But the flip side is that your current car might be out-developed by other teams and you find yourself losing out on prize money, only to underperform next year anyway.

It's a gamble that has paid off for some in the past but has knocked other teams back for years.

This year, that particular calculation is made all the more complicated by the major overhaul to the technical regulations being planned for 2021.

Trying to decide how soon to start looking at the design for 2021 and how much resource to put on it has been difficult, especially when the proposed rules have continued to change and - depending on how the political situation develops in the sport - may not even be introduced at all.

The big three teams are opposing the new rules and Ferrari have the nuclear option of vetoing them. In that event, any work we put in now could be a complete waste of time.

What is the idea behind the new rules?

The aim of the new regulations is to make it easier for one car to follow another car without losing performance, and therefore to get closer racing and more overtaking.

At the moment, drivers find it very difficult to get close enough to a car in front to overtake it. Why is it so difficult and how might the new proposals help?

Aerodynamics is often blamed for the difficulty in following another car. Ultimately, this all comes down to wake, which is what we call the churning, turbulent air which comes off the back of bluff bodies like a Formula 1 car.

Because it is hard to see this air, it can be difficult for people to picture what is going on here. To get an idea, watch an oar being pulled through a river. You can see the swirling water dragged along behind it. This is the oar's wake and it's very similar to the air behind an F1 car.

Why is the wake so problematic?

The reason F1 cars travel so fast around corners is because they are pushed down on to the track by aerodynamic downforce - this makes the tyres grip and stops the cars from skidding off the road at speeds that would put most cars backwards into a hedge.

Downforce comes from generating suction or low pressure underneath the car, and to lower the pressure of air you have to increase its speed.

But the ability of the car to create downforce is affected by the nature of the air that the car is passing through. Give it nice, smooth air - or 'clean', as we aerodynamicists sometimes call it - and the downforce-producing surfaces of the car work well. If the air is messy and turbulent - or 'dirty', as we say - they don't.

After air has gone over an F1 car, it is swirling around and travelling in all directions. It's also been dragged along a bit in the direction of the car ahead. Effectively, it's not travelling towards the car behind as fast as it could be.

Because of this, it's not possible to make this 'dirty' air travel under the car as fast as 'clean' air. So the car behind produces less downforce, which the driver will notice as a loss of grip.

Wake is not just a problem for the car behind. The wake produced by some parts of your own car creates difficulties, too.

An example of this would be the air disturbance created by the front tyres. This has a seriously negative effect on the parts further along the car that are designed to produce downforce. The result of this is that aerodynamicists want to push the wake from their front tyres as far out to the sides as possible to stop it from getting sucked under the floor of their own car.

What happens to it after that is of little concern to us. It is, however, of concern to the owners of F1, because this air tends to get drawn back in, around a second behind, right on to any following car whose driver might be thinking about trying to overtake.

How can this problem be fixed?

This is where the new regulations come in. In order to try to reduce this problem and allow cars to follow much more closely, F1 has taken a two-fold approach.

The first step is to tightly restrict what geometry we can design at the front of the car, particularly the front wings and in the areas around the front wheels.

This will reduce our ability to push the tyre wake away from the car.

The second is to allow for much more powerful diffusers - the curved part of the rear floor of the car, where the air underneath the car exits - and rear wings.

This is intended to have the effect of scooping up the wake and throwing it over the top of any following car - creating an 'up-wash', as it is known.

Would the new rules work?

There is concern from some quarters that this extra up-wash itself will reduce the performance of the following car, particularly the front wing.

This is one of the concerns the big teams have pointed out to F1 when criticising the rules - that the new cars will be afflicted by a catastrophic lack of front-end grip.

However, the research conducted by F1's in-house aerodynamic department appears to suggest that this is outweighed by the increase in clean air delivered to the second car.

There have also been noises from some teams suggesting that the lack of freedom will make the cars look more uniform and reduce the reward for doing a good job of design.

From what I hear, though, F1's own aerodynamicists were still carrying out wind-tunnel testing very recently, and still finding lots of performance gains. In my opinion, the team of designers who do the best job will still produce the fastest car in 2021, even if the gaps between the cars might be smaller.

Personally, I think it's no bad thing if the difference in lap time is reduced between a team who do a good job, and one that does a bad job.

All that would mean is that good drivers are more likely to be rewarded for their efforts. A driver who is 0.2 seconds a lap quicker than a rival, in a car that is 0.1secs slower, could still win the race. If that gap is 0.5secs or more, as it is between F1's 'big three' and the rest of the field, the drivers can't make that difference.

Of course, as is always the way in F1, everyone wants to protect their advantage.

But I hear that the FIA and F1 have stuck to their original plans and that the regulations that will be voted on by the FIA world council on Thursday remain true to the original proposal. If they finally get approved, that will be the starter pistol for the development race.

How are the teams approaching the rules?

Having to work on three different cars at once, with two different sets of regulations, is a real stretch for the aero department, especially when resources are already tight.

I hear from friends at other teams that everyone is approaching the unknown quantity of the 2021 rules differently.

I know of at least one team that has had a 2021 model in their wind tunnel for some time. This might mean they are ahead of other teams, but, with the restrictions on wind-tunnel testing, they will have directly taken away from development they are allowed to do on this and next year's cars.

The work they have done will also have been of only limited relevance given that the proposed regulations have changed a number of times over the last few months.

Whether that shows and they slip backwards, or whether they get away with it, but get the jump on the competition for 2021 is the million-dollar question.

I know other teams have taken a more conservative approach, preferring to wait until the rules are fixed to avoid wasting time and effort looking at the wrong thing. Will they already be too far behind in this two-year long development race to catch up? Only time will tell.

Personally, I just want the rules confirmed so we can get stuck into the design work with confidence.

As an aerodynamicist, it's always exciting when sweeping changes come in as you have to throw out everything you thought you knew and relearn it all again. There is a palpable sense of optimism and opportunity.

Maybe, just maybe, we'll design the fastest car in the world in 2021.