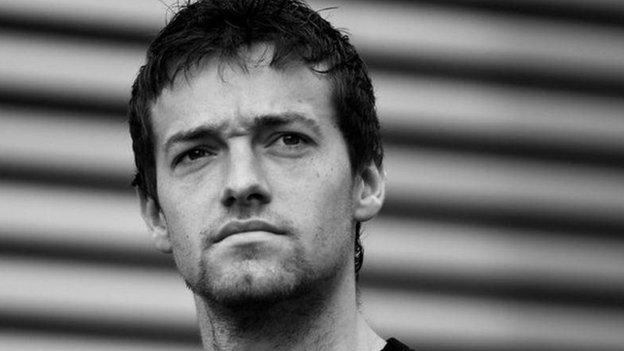 Former F1 driver Jolyon Palmer, who left Renault during the 2017 season, is part of the BBC team and offers insight and analysis from the point of view of the competitors.

Max Verstappen caused a stir in Mexico last weekend. It was a race he could and should have won, but didn't because of some naivety and a disregard for the rules.

There is no excuse for his actions in qualifying on Saturday, when he failed to lift off as he passed yellow warning flags for Valtteri Bottas' crashed Mercedes. But on a wider level Verstappen is actually taking some unwarranted criticism at the moment.

Lewis Hamilton, Sebastian Vettel and Bottas were quick to throw jabs at Verstappen in the post-race top-three news conference.

Hamilton said you had to be aware you are racing Verstappen and give him extra space, and alluded to the fact that he isn't the smartest racer. Vettel agreed. And Bottas declared the Red Bull driver came from nowhere in his overtake in the tight stadium section and could blame only himself for the puncture that ruined his race.

Hamilton's notion that Verstappen "torpedoed' him at the start is well wide of the mark.

Actually, it was Hamilton who was bold in trying to pass Verstappen around the outside at the start. Hamilton ended up getting into a massive slide all on his own, and that forced Verstappen off on to the grass at Turn Three, along with the Mercedes.

This wasn't anything more than plain, hard racing. So finger-pointing at Verstappen post-race is just unfair. Verstappen was actually the innocent victim in that incident, which demoted him from his fourth place at the start down to eighth.

From there, Verstappen's move on Bottas consigned him to a race of recovery, but there was nothing wrong with that. It was a lovely overtake and - again - good, hard racing. Yes, it was aggressive, but Bottas has no right to be complaining about it.

Does Verstappen deserve his reputation?

When you actually analyse the last year and a half of Verstappen's career, since Canada 2018, he has been brilliant, and at least as fair as most of his rivals around him.

The sad truth for him is that he is carrying the reputation along with him that he earned in his early Formula 1 career, when he arrived as a raw 17-year-old with only a year's experience in car racing under his belt.

Looking at some of the incidents of recent times, it is other drivers generally at fault:

The only real misdemeanour Verstappen has made has been beating Leclerc to the win in Austria by driving him wide on the exit of Turn Three - a move not as bad as either Vettel's or Leclerc's in Mexico or Italy, and one that, while it could have gone either way, the stewards deemed legal.

Verstappen's move on Bottas in Mexico was the only overtake any of the front-runners could put on each other in the entire Grand Prix. He was simply unlucky to pick up a puncture for it. And his recovery drive was incredible.

After driving around for an entire lap on three wheels, Verstappen finally emerged from the pits on lap six a full minute behind race leader Leclerc.

After a further 66 laps, having passed 14 cars, most of which were on track with some spirited moves that at times were arguably a bit too risky, he ended up 68 seconds away from the race winner Lewis Hamilton, and pretty much still a minute behind Leclerc.

Paying the price for a foolish error

Verstappen's Sunday was purely unlucky. But his weekend began to unravel because of his foolish moment on Saturday, and subsequent petulance in the news conference. That is what cost him a likely victory.

Had Verstappen followed the rules at the end of qualifying, he would have been on pole position, not next to Hamilton at the start. He never would have needed to pass Bottas, and he had the pace to win this Grand Prix at a canter.

Verstappen is one of the outright fastest drivers out there, as each of his three Red Bull team-mates in the last year can attest.

So what went wrong?

His initial pole lap in Mexico was superb, underlining his pace, and putting team-mate Alexander Albon in the shade.

At the end of the session, attempting to improve on his time, he kept his foot to the floor past Bottas' crashed Mercedes, when yellow flags were flying. That was foolish and cost him the pole he was so desperate for.

All drivers are aware of the rules when it comes to passing yellow flags. It has been ingrained in them for years. You have to back off.

I was given exactly the same penalty as Verstappen in China 2017, after Antonio Giovinazzi hit the wall in his Sauber.

I thought I might get away with it, because I did actually lift off past the incident and had no time on the board anyway, so either way it was a risk I had to take. Haas driver Romain Grosjean received an identical penalty at the time, and the message became perfectly clear.

Since then, there have been other cases of drivers improving under yellows, but they are getting rarer and rarer, and are usually involving someone, like Grosjean and me in 2017, who has no time on the board and therefore nothing to lose.

Verstappen in fact picked up the same penalty for the same crime in Sochi last year, but that was in a nothing-to-lose context - he was going to start from the back regardless.

However, in Mexico, Verstappen had everything to lose and nothing to gain.

But he wouldn't necessarily have known that. In the cockpit, he probably thought Bottas' crash was going to cost him pole, as his rivals might improve and he wouldn't be able to. That is the only mindset that makes sense here, and therefore Red Bull could have helped him out from the pit wall.

Albon and Leclerc came through and didn't improve before Bottas crashed. Hamilton was close enough to Bottas to not have yellow flags when he came through the crash site, but was slower in the final sector anyway.

But Red Bull would have known the rules as much as the drivers, and they should have just told Verstappen to abort the lap as soon as the crash happened, because it was clear that his pole lap was going to be unrivalled anyway by that point.

But this doesn't excuse Verstappen, who should have known he had to back off anyway, as Sebastian Vettel had done ahead.

What was surprising is that it seemed to take Verstappen's comments in the media to spark an investigation at all.

This was where the Dutchman really dug his own grave and forced the hand of the FIA, who by this point had no choice but to investigate and subsequently penalise the Red Bull man.

Clearly on the defence under questioning as to why he had not lifted off, Verstappen was rattled and reeled off a load of curt answers that were both an admission of guilt and a scant disregard for safety at the same time.

A driver acting more cleverly might have been able to avoid the questions better than Verstappen, or certainly not answer them as directly as he did.

He also seemed unaware at this point as to what the rules were - not only by plainly breaking them in the action of keeping his foot down, but also by suggesting that if he were found guilty he would just have that final lap time deleted.

That is the penalty for being guilty of exceeding track limits on a qualifying lap, not for driving flat out past a crashed car, as he had found out a year previous in Russia.

Judge Verstappen for now, not then

With his aggressive driving, and bullish remarks he makes himself arguably the most polarising driver on the grid at the moment.

It was only a year and a half ago, after all, that he declared that he would punch in the face the next reporter who asked him about his series of early 2018 accidents.

But the reality is that in Mexico one error of judgement cost him, and made him an easy target for those around him and the media to harp back to the old version of him.

Qualifying in Mexico did highlight that there is a level of immaturity to him, on and off the track. But Verstappen is still only 22; there's plenty of time to mature.

Ultimately he is one of the best and certainly most entertaining drivers out there. While he has certainly had a chequered past in F1, right now he still cops a lot of flack he doesn't deserve, from both his fellow drivers and the media.