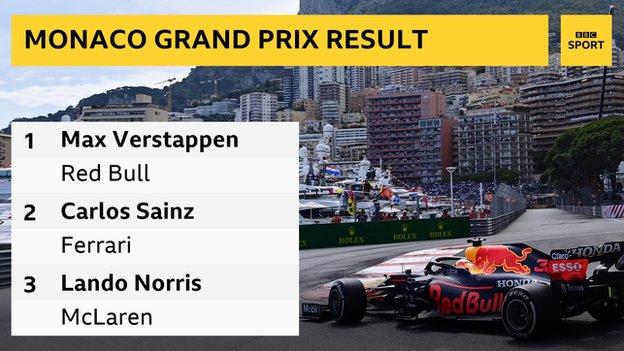 The Dutchman controlled the race after pole-sitter Charles Leclerc's Ferrari broke down before the start.

He lost places to two drivers over the pit-stop period as Mercedes reversed their intended strategy.

Adding to a bad day for the world champions, Hamilton's team-mate Valtteri Bottas retired when mechanics were unable to remove his right-front wheel at his pit stop when the wheel gun stripped the nut.

Bottas was running second to Verstappen but had been losing ground before his stop and his hopes of victory had evaporated and turned into concerns as to whether he could protect second place from Ferrari's Carlos Sainz.

The Spaniard finished in a comfortable runners-up spot, with McLaren's Lando Norris taking the final podium place, fending off late pressure from Red Bull's Sergio Perez, who drove a strong race to recover from qualifying ninth.

Aston Martin's Sebastian Vettel - who, along with Perez, passed Hamilton during the pit-stop period - was fifth, ahead of Alpha Tauri's Pierre Gasly and the Briton, who made a late pit stop to secure the point for fastest lap.

Verstappen's second victory in five races, coupled with a bad day for Mercedes, moved the Red Bull driver into a four-point championship lead, while Red Bull have taken first place in the constructors' championship from Mercedes by one point.

It is the first time in his F1 career that Verstappen has led the world championship.

A consummate drive to victory

Verstappen was disappointed to miss out on pole position on Saturday, feeling he was on target to beat Leclerc's time on his final lap before the Ferrari driver crashed and brought the session to an end.

Ferrari inspected Leclerc's car after the accident and again on Sunday morning and came to the conclusion that they did not need to change the gearbox, which meant he left the pits expecting to take up his place at the front of the grid for his home race.

But halfway around his reconnaissance lap, Leclerc came on the radio to say he was having gearbox problems.

He pulled into the pits and before long Ferrari had concluded they could not repair the car, saying that they had discovered a problem with the driveshaft.

His retirement gave Verstappen a clear run into the first corner and, after fending off an attack from Bottas off the grid, the Red Bull driver moved into a lead he was never to lose.

What went wrong at Mercedes?

Bottas tracked Verstappen closely while they went through the tyre management early laps but, as the pit stops drew closer, the Mercedes began to run out of tyres earlier than the Red Bull and began to drop back.

Sainz began to complain in third place that Bottas was holding him up and behind them Norris was dropping back and Gasly was holding up Hamilton.

Mercedes' pre-race strategy with the world champion was to conserve tyres and then try to sprint and make up ground by staying out while others stopped in front of him.

But they spotted a gap in traffic behind into which they could drop Hamilton and try to undercut ahead of Gasly by running fast on fresh tyres.

Hamilton stopped on lap 29 but Alpha Tauri responded on the following lap and, despite Hamilton putting in the fastest out lap of the race and a quicker pit-lane time than Gasly, the Frenchman returned to the track still in front.

Hamilton immediately expressed his bemusement at this turn of events over the radio, but things were soon to get worse.

Two laps later, Vettel stopped. The German had been behind Hamilton for the first stint, but his two laps in free air gave him the opportunity to make up time, and he rejoined the track alongside Gasly, the two racing side-by-side up the hill and claiming the place ahead of both cars into Massenet.

While that was going on, Perez in the second Red Bull was staying out yet longer. He stopped five laps after Hamilton and had made up enough time to leapfrog Vettel, Gasly and the seven-time champion to take a superb fourth from ninth on the grid.

"I don't understand, guys," an exasperated Hamilton said on the radio. "I saved the tyres to run longer and you stop me before everyone."

There will doubtless be an inquest as to how the race went so wrong but first suspicions are that their car was just not fast enough, and their tyre wear one of the worst in the field for once.

In two weeks' time, another street circuit, but one of very different character. The Azerbaijan Grand Prix in Baku has the longest 'pit straight' in Formula 1, and often produces madcap races full of action.

'It's so special to win' - reaction

Max Verstappen: "It's so special around here to win. It's my first time on the podium here. Amazing race. It's a lot of laps - you really have to keep your focus, but it's really cool. I'm very proud, but I'm also thinking ahead - it is a very long season."

Carlos Sainz: "It's a good result. If you would've told me before coming to Monaco I would finish second, I definitely would take it. I think Ferrari need to be proud about the car and the step we've made. I felt good with the car today and I felt the team deserved a podium."

Lando Norris: "I don't know what to say. I didn't think I'd be here today. It's always been a dream to be on the podium here. It's extra special. It was a bit of luck - and I want to say good driving, and a good car all weekend. This one is for the team."