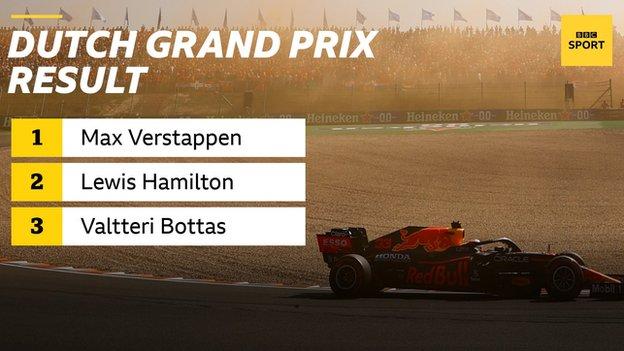 Verstappen, cheered on by 65,000 enthusiastic home fans, led all the way from pole position, comfortably keeping a following Hamilton at bay.

The Dutchman leads Hamilton by three points after his seventh win in 2021.

Mercedes tried what they could to challenge Verstappen, putting Hamilton on a two-stop strategy, then trying to use Bottas to hold him up, but Red Bull always appeared to be in control.

There appeared to be some disagreements between Hamilton and the team on the strategy deployed, but their conversations were a function of the fact that Verstappen just had that bit of extra pace to be able to answer everything Mercedes threw at him.

"They were just too fast today," Hamilton said over the radio on the slowing down lap.

How did it play out?

After leading from the start, Verstappen was 3.5 seconds ahead of Hamilton when Mercedes pulled the seven-time champion in for a pit stop on lap 20, too early for the predicted one-stop race.

Red Bull responded a lap later with Verstappen, but Mercedes left Bottas out and the Finn took the lead.

As Verstappen and Hamilton closed in, the Finn was told he had to defend if he wanted to try to win the race.

But as soon as Verstappen caught him, Bottas went in too deep at the chicane, allowing the Red Bull to close right in and sweep past down the pit straight.

That was Bottas' hopes finished, and Hamilton's were effectively the same, even if the Briton continued to try to put up a fight.

After the first pit stops, Hamilton was less than two seconds behind for 16 laps, which is close enough to try for the under-cut strategy - pit first and try to use the grip from fresher tyres to gain a place.

But Mercedes missed the chance and, in three laps from lap 36 to lap 39, Verstappen pulled a further second clear, at which point Mercedes pitted Hamilton.

Red Bull responded the following lap - fitting hard tyres rather than the mediums Hamilton took at his second stop - and Verstappen retained the lead.

Hamilton complained that Mercedes had stopped him too early, then that his tyres would not go to the end.

When Mercedes suggested he manage them, he asked them whether they were asking him not to race, because he was pushing to close the gap, at which point they told him to keep going.

Hamilton closed in again to just over a second behind Verstappen as they lapped other cars, but dropped back again once they were back on a clear track.

Hamilton's consolation was a late pit stop to claim the point for fastest lap.

There was an interesting twist, though, when Mercedes pulled Bottas in for a late pit stop and ordered him not to go for fastest lap - only for the Finn to ignore the plea.

Before the end of the lap, strategy director James Vowles came on the radio and asked him to "please abort the fastest lap attempt" but despite that Bottas did post the quickest time - which many will see as an indication that George Russell will be announced as his replacement at Mercedes within the next few days.

Bottas later claimed he "didn't go for it" - and he did back off in the final sector, to make it easier for Hamilton to reclaim it.

"I knew Lewis was going to stop as well," Bottas said, "and I knew with a decent amount of lifting in the last sector he will get it, so no drama."

Hamilton duly pitted on the next lap and reclaimed the point from his team-mate.

Gasly matched his highly impressive fourth place on the grid with a comfortable drive to finish in the same place, ahead of Leclerc.

Fernando Alonso drove an excellent, measured, controlled race to pass the second Ferrari of Carlos Sainz for sixth place on the final lap.

Red Bull's Sergio Perez recovered from a pit lane start to take eighth place, ahead of the second Alpine of Esteban Ocon and McLaren's Lando Norris.

The Italian Grand Prix in a week's time. Hamilton's engineer said they will bounce back at super-fast Monza, but Verstappen is looking very hard to beat right now.