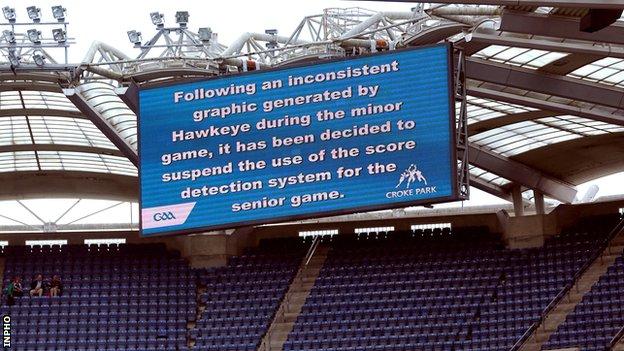 Limerick will appeal against their defeat by Galway in Sunday's All-Ireland Minor Hurling semi-final.

This follows a clear error by the Hawk-Eye score detection system when a Limerick point was ruled a wide in Sunday's semi-final.

Limerick officials confirmed on Monday night that they would be lodging an appeal to the GAA.

Following the Hawk-Eye mistake on Sunday, the system was not used for the senior hurling semi-final.

On Monday, Hawk-Eye managing director Steve Carter apologised for the high-profile mistake and said that it had been caused by "human error".

"All of the settings were adjusted to cater for hurling, bar one value for the Hill 16 end posts, which was set for football," said a Hawk-Eye statement.

"Steve Carter, the Managing Director of Hawk-Eye Innovations, met with the representatives of the GAA at an urgent meeting this evening.

"He explained the cause of the malfunction and the operational steps being taken, under his personal supervision, by the Hawk-Eye team to ensure there will be no repetition.

"Sony Hawk-Eye wishes to apologise to the GAA and its supporters and to reassure them that the system will be fully reliable for all future games."

The point denied Limerick victory with the match finishing level and Galway going on to win 0-23 to 0-20 after extra-time.