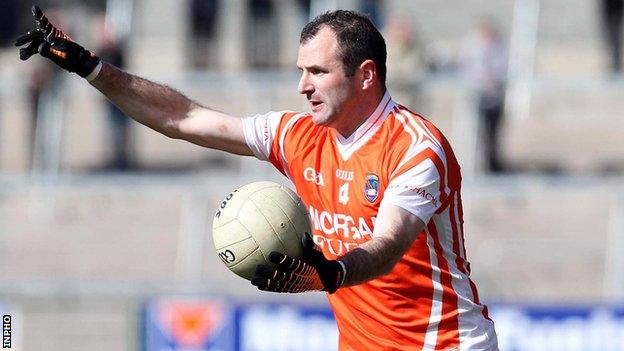 Former Armagh star Steven McDonnell has been appointed as the county's new under-21 football manager while Paul Grimley will remain on as the Orchard County's senior boss for another year.

Former Footballer of the Year McDonnell takes over from Mattie Lennon.

McDonnell is the latest member of Armagh's 2002 All-Ireland winning line-up to go into management.

McDonnell's move into the Under-21 job suggests that the Armagh county board view the Killeavy man as a future senior boss.

However, Grimley stays in the Armagh senior job for the 2014 campaign.

Grimley took over the job from Paddy O'Rourke after the 2012 season as being part of the previous regime's back-room team.

In truth, the 2013 campaign saw Armagh continue to struggle as Grimley took on the job of attempting to rebuild the county's fortunes.

The Orchard County had to battle hard to stay in Division 2 and then suffered a hugely disappointing Ulster Championship defeat by Cavan, when Grimley's match-tactics came in for severe criticism.

Armagh appeared to be regrouping in the qualifiers as they hammered Wicklow and Leitrim but their summer ended when they were well beaten by Galway.