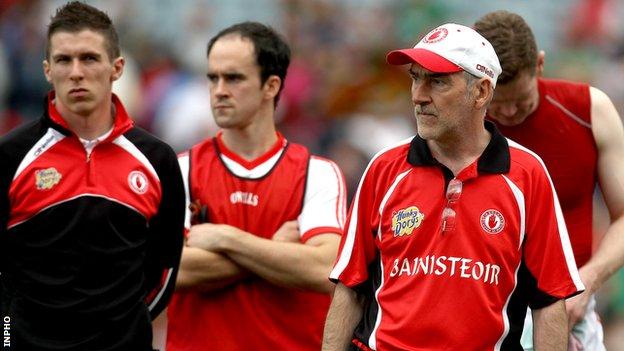 Tyrone boss Mickey Harte said they had to accept the verdict of the referee Maurice Deegan after Mayo's disputed penalty in the All-Ireland semi-final.

Mayo scored the penalty and went on to win 1-16 to 0-13 but it looked as though Dermot Carlin's foul on Colm Boyle had been just outside the area.

"I was too far away to make a definitive call on it," said Harte.

"It may have been outside but the penalty was given, they scored and we are out of the Championship."

The Tyrone boss added: "A penalty is always a big score in any game, and in such a tight game it is crucial.

"But I think we lost the game before half-time.

"We were seven points to three up and doing much better than many people had anticipated.

"But we did not hold on to that and they got back into the game before half-time. Mayo played a very good second half.

"The injuries to Peter Harte and Stephen O'Neill were big losses but that is the way life goes.

"We were in the game for long periods and up to half-time we thought we were doing well."