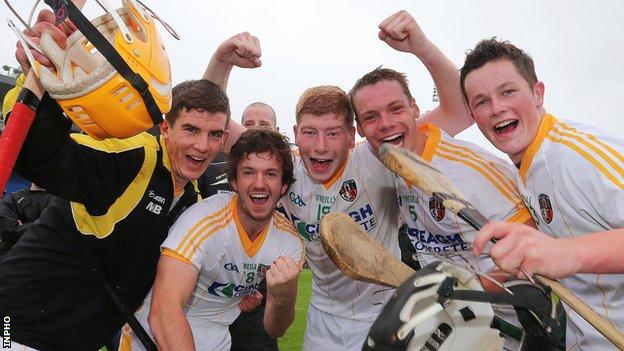 The Saffrons went into the game as 1/80 outsiders with some bookmakers.

Kevin Ryan's side were also minus a couple of squad members who cried off from the panel because of weekend club football games in Antrim.

The Antrim management team was only formed last month when senior county boss Ryan took on the managerial reins and asked county senior players McManus and Barry McFall to work as his selectors.

The young Saffrons went on to hammer Derry 6-22 to 0-6 in the Ulster final but nobody gave them a prayer going into the All-Ireland semi-final against a Wexford side that had defeated Kilkenny in the Leinster decider.

Down through the years, Antrim Under-21 teams have routinely been handed hammerings at the All-Ireland semi-final stage and an Ulster county had never previously qualified for the national decider.

In addition, only 14 players turned up at training last Thursday some 48 hours before the Thurles contest and the Saffrons couldn't even manage to fill their substitutes list at Semple Stadium as they travelled south with only 20 players.

"We haven't been together for very long and we've had a limited amount of time together and a limited number of players to work with but that all probably makes it all the sweeter for the few that are involved," added McManus.

"The reaction at the final whistle was just euphoria. These guys made history and it's a day that will live long in the memory for each of them and they are going to sample the experience of All-Ireland final day."

But while the Saffrons were entitled to celebrate heartily after their stunning triumph, McManus insists that the county must use this win as a genuine springboard to further success.

"The one thing that it does show is that it can be done. We can compete with these counties and on any given day it can happen.

"We showed that we have some very, very talented hurlers.

"But it's all about bringing these guys through to the senior panel now and strengthening it to their best of our ability and driving on from here."

Despite their win over Wexford, the Saffrons will be big outsiders in the All-Ireland decider against holders Clare on 14 September.

The Banner County hammered Antrim 4-23 to 0-7 in last year's All-Ireland semi-final before accounting for a strong Kilkenny side 2-17 to 2-11 in the decider.

"Clare are a fantastic team and are probably the best Under-21 team that the country has ever seen," continued McManus.

"There are quite a few of their Under-21 panel that are going to be involved in the All-Ireland senior final.

"We are going to be very realistic about the opposition that we will be facing and we won't be getting ahead of ourselves.

"We'll take the positives from Saturday's fantastic result and learn as much as we can from the All-Ireland final.

"But it will be a very tough ask to expect Antrim to beat Clare in an All-Ireland final."