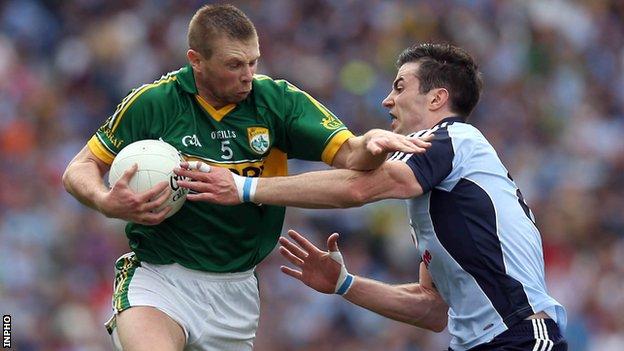 O'Donoghue then slotted a Kerry penalty as they led 3-5 to 1-9 at half-time.

Substitute McManamon's strike brought back memories of his late winning goal in the All-Ireland decider against the Kingdom two years ago when he had also been sprung from the bench.

Kerry appeared set to win a Stephen Cluxton kick-out but Michael Darragh McAuley reached to fist the ball to the unmarked McManamon 60 metres from the Kingdom goal and he ran unchallenged before lofting a shot into the roof of the net over Brendan Kealy.

With the sides level, it seemed improbable that McManamon wouldn't take his point as he charged into the heart of the Kerry defence but his shot looped in under the bar.

McManamon said after the final whistle that he had "aimed for the bar and hoped I would get something".

Macauley and Bernard Brogan had kicked Dublin into an early two-point advantage but O'Donoghue's opening goal put the Kingdom ahead on seven minutes as Colm Cooper was pulling the strings in the Kerry attack.

Another stunning Cooper pass allowed Darran O'Sullivan to set up Walsh's second Kerry goal four minutes later as the suspected frailty in the Dublin full-back line was exposed once again.

However in probably the crucial moment of the match, Dublin replied with a goal of their own within a minute as Mannion rose to punch a miss-hit Connolly shot past Kealy.

Scores from keeper Cluxton and Bernard Brogan reduced Kerry's lead to the minimum but Kerry were four ahead in the 20th minute as O'Donoghue drilled him a spot-kick after the Dublin keeper had hauled down Walsh.

Dublin were able to cut Kerry's lead to two by the interval and Jim Gavin made a crucial change at the break as he withdrew the struggling Ger Brennan and opted to employ Cian O'Sullivan to shackle Cooper in the second period.

With Rock's introduction also helping the Dubs, their strong-running began to hurt in the Kingdom in the 15 minutes after half-time and a run of five unanswered points was completed by Connolly's lead score in the 51st minute to put the Metropolitans ahead for the first time since the seventh minute.

However, Kerry regrouped to regain the lead by the 63rd minute as Darran O'Sullivan pointed from an acute angle.

A five-minute scoring lull followed before Connolly, waving Cluxton away, held his nerve to point a free with his weaker left foot from wide on the 21 metre line.

At that stage, a draw would surely have been a fair outcome but there was much drama to follow was McManamon's remarkable goal in the final seconds of normal time was followed by Connolly's insurance point in injury-time and Rock's close-range palmed goal after Eoghan O'Gara's shot had hit the underside of the crossbar.

In between, Dublin's two late goals, Kerry's Anthony Maher was sent off after getting a second yellow card as Jim Gavin's side progressed to a final-meeting with Mayo on 22 September.