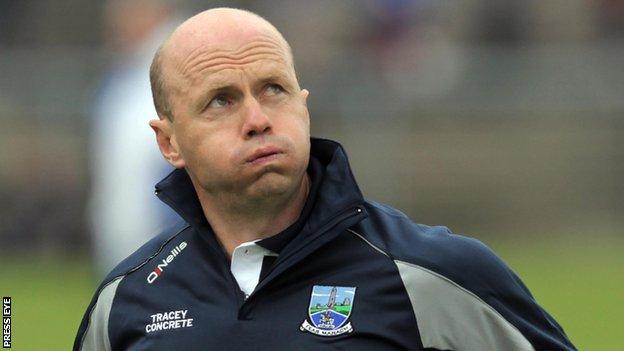 Former Tyrone player and six-times All Star Peter Canavan has resigned as Fermanagh's senior manager, it was announced on Monday night.

Canavan had been in charge of the Erne county since November 2011.

In his first season in charge, Fermanagh were promoted to Division Three of the league and this year they narrowly missed out on going up again.

Victory in an Ulster Championship game eluded Canavan who had previously managed his club Errigal Ciaran.

Canavan took over the Fermanagh post after John O'Neill's one year in charge.

As a player, Canavan captained Tyrone to the All-Ireland title in 2003 and also played in another Sam Maguire Cup-winning side two years later.

This season Fermanagh finished third in Division Three of the Football League, a point behind promoted Meath and Monaghan.

In the Ulster Championship, they lost 0-13 to 0-11 to Cavan and then went into the All-Ireland qualifiers in which they beat Westmeath before falling to Cavan for a second time.

"My management team and I have worked extremely hard over the past two years and we believe significant progress has been made," said Canavan in a statement.

"The senior footballers now representing their county are fully committed, unified and ambitious. With a clear vision and a united county committee I have no doubt that the players will respond in a positive manner.

"I want to thank my management team for their incredible efforts and sacrifices over the period I was in post and finally my sincere thanks are extended to the special group of players who I have worked with over the past two years."