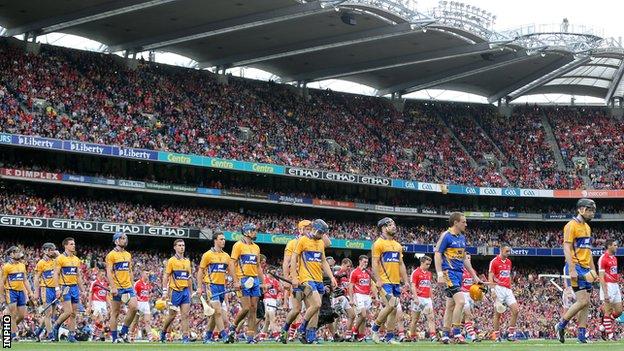 The GAA has confirmed the All-Ireland senior hurling final replay will be played on a Saturday for the first time ever, with a 1700 BST throw-in.

Sunday's draw between Clare and Cork in front of 81,651 fans in Croke Park has set up the second replay in a row, with last year's being the first since 1959.

The GAA has announced that, like last year, ticket prices for the replay on Saturday, 28 September will be reduced.

However the Association is still set to earn a windfall of around €3m (£2.5m).

Last year's replay between Kilkenny and Galway was played on a Sunday, with the Ladies' finals being moved to accommodate it.

In keeping with president Liam O'Neill's ambitions to strengthen links with one of the GAA's sister organisations, the Ladies finals will go ahead as planned on Sunday, 29 September, but there will be some concerns over a Saturday evening throw-in for a game that will attract a near-capacity 82,300 crowd.

The GAA confirmed that like last year, admission prices will be greatly reduced for the replay with stand tickets down from €80 to €50, while entry to Hill 16 will be €25, a reduction of €15.

An additional 5,000 juvenile tickets will be available for €10, for supporters from Clare and Cork only, but the GAA is still set for a significant financial windfall.

Clare were ahead for most of the game on Sunday but Cork almost snatched victory when they took the lead for the first time in injury-time through a Patrick Horgan point.

Domhnall O'Donovan rescued Clare with an equalizer in the third minute of injury-time to set up a replay in three weeks' time.