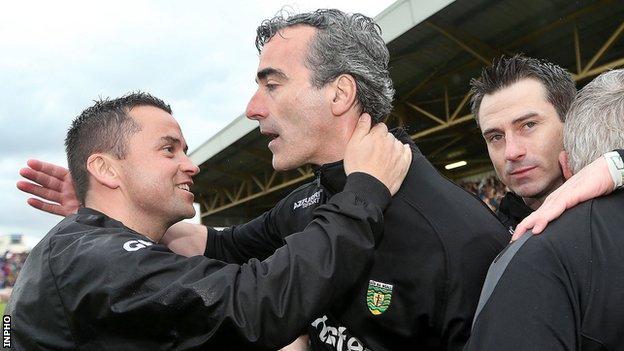 Jim McGuinness may be remaining on as Donegal football boss but Rory Gallagher and Maxi Curran have both stepped down from their roles in the county's management team.

Gallagher and Curran are understood to have met McGuinness on Sunday and informed him that they were unable to commit for 2014.

Both are believed to have cited family and work commitments as their reasons.

The news is believed to have come as something of a bombshell to McGuinness.

Kit man Francie Friel is also believed to have left his role with the county's footballers.

McGuinness told Highland Radio on Sunday that he didn't anticipate any changes to his backroom team but that unravelled after his meeting with his backroom trio later in the day.

A Donegal GAA statement late on Tuesday evening confirmed the departure of the trio and said that that McGuinness had informed the county board of his "intention to make changes in his management and support team".

The statement acknowledged the "immense contribution" made by the trio in recent years.

Gallagher has been one of the most high-profile assistant managers in the modern day intercounty game.

The Fermanagh man has been invariably in close consultation with McGuinness during games and is regarded as an exceptional tactician.

Gallagher will now inevitably be linked with vacant county managerial jobs which currently include his native Fermanagh, Sligo and Kildare.

Downings man Curran's role in the management team has included being responsible for video analysis in addition to acting as one of McGuinness's selectors.

Curran took charge of Donegal for this year's McKenna Cup campaign when the majority of the senior squad were not involved.

McGuinness's position as manager had appeared in some doubt last month amid apparent differences over the scheduling of club games.

However, a Donegal statement on Saturday evening said that the county was "delighted to announce" that McGuinness had agreed to stay on.

Last month, McGuinness told BBC Sport that the conditions would "have to be correct" for him to remain on on manager.

However, these difficulties appeared to have been ironed out with the county board reported to have agreed to McGuinness's request that no senior and intermediate club championship matches should be played in 2014 until after the county's exit from the championship.