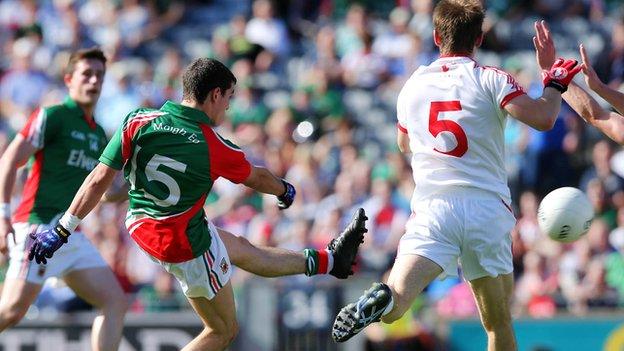 Mayo won the All-Ireland Minor Football Championship for the first time since 1985 with a 2-13 to 1-13 win over Tyrone at Croke Park on Sunday.

Tommy Conroy's goal late in the first half gave Mayo a one-point lead at the break and they then blitzed Tyrone with four points and a Darragh Doherty goal.

That left Tyrone trailing by eight points but they battled back to cut the deficit to just three.

Mayo hit a series of points before Conor McKenna's late goal for Tyrone.

McKenna got the ball in the net in the last minute of stoppage-time but it came too late to revive Tyrone's chances of a fourth Tommy Markham Cup triumph in 10 years.

Mickey Donnelly's lads will rue how they finished the first half and started the second.

They had repeatedly edged ahead in the first half with Ronan Nugent (2) Lee Brennan, David Mulgrew and captain Ruairi McGlone scoring for the Ulster county.

Mayo had pulled level on four occasions - each time through Liam Irvine frees.

But then came Conroy's 29th-minute strike which Red Hands keeper Sean Fox could only push into his net.

Tyrone, 0-6 to 1-4 down at the interval, needed a solid start to the second period but instead they were swept aside by a Mayo whirlwind.

Conor Loftus, Darragh Doherty (2) and Tommy Conroy slotted over points before a good passing move stretched the Tyrone defence and ended with Doherty finding the net.

Mayo were now sitting on a 2-8 to 0-6 lead and a seventh Minor title in their history appeared in the bag.

However, frees by Lee Brennan and Darragh Gallagher, plus scores from play by Brennan and Ronan Nugent halved the arrears.

Loftus revived Mayo with a point, although Tyrone sub Cathal McShane, and Brennan again, left just three between the sides.

Mayo, though, added four to calm any nerves, leaving McKenna's late point and goal mere consolation at the end of the day.