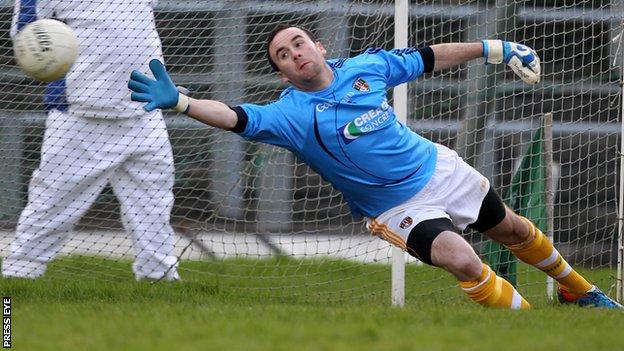 St Gall's won their seventh successive Antrim Senior Football title as they edged out Cargin 0-12 to 0-11 in the decider at Ahoghill.

Gall's keeper Chris Kerr saved a Cargin penalty early in the second half taken by his opposite number John McNabb.

St Gall's led 0-5 to 0-4 at half-time and Cargin levelled after the restart before Kerr's vital penalty save.

The holders moved two ahead and while Cargin got on terms with seven minutes left, St Gall's edged ahead again.

Tomas McCann had a late goal chance for Cargin but his shot was blocked by St Gall's corner-back Conor Burke.

Sean Burke was also suspended for the decider after his dismissal in the same game.

Underdogs Cargin included recent recruit Michael Magill and he notched a couple of scores for the losers.

The opening period was cagey with Kevin Niblock among St Gall's scorers and Tomas O'Boyle notching a couple of Cargin's points.

After Kerr had saved McNabb's penalty just after half-time, Cargin felt that St Gall's next point should have been ruled a wide.

St Gall's moved two ahead on a couple of occasions in the second half with Sean Kelly among their scorers.

The Toomebridge outfit hit the last point of the game but St Gall's held on to take the victory with McCann's late chance blocked by Burke.

St Gall's finished the match with 14 players after last substitute Kevin McGourty received a straight red card in the closing minutes of the game.