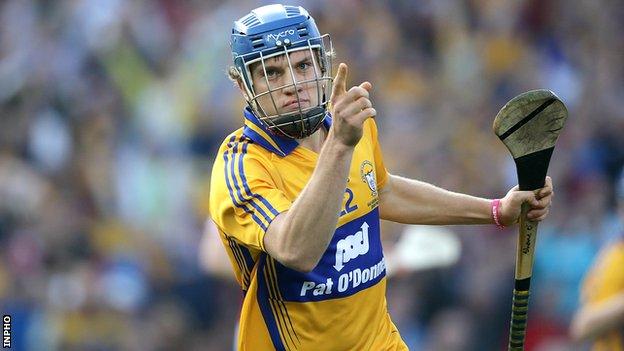 In another game played in front of 82,000 spectators, O'Donnell hit his three goals in the opening 19 minutes as Clare moved eight points ahead.

Honan had been the player displaced by O'Donnell as Banner County boss Davy Fitzgerald made a late change to his starting line-up.

All O'Donnell's scores came from play as he played a massive role in Clare winning their first All-Ireland title since 1997.

But probably the crucial play of the match was McGrath's 62nd-minute goal which swayed the game in the Bannermen's favour again after Cork had looked on course to complete a stunning comeback victory.

McGrath ran through the defence before picking his spot with a precision shot past Nash to the roof of the Cork net.

The goal helped Clare move six clear and while Moylan's 70th-minute reply left only a puck of the ball between the teams, Honan virtually walked the ball into the net in the second minute of injury time to complete the Banner County's emotional success.

O'Donnell hit the opening goal in the sixth minute after taking a pass from captain Patrick Donnellan.

The late replacement then notched his second three-pointer in the 13th minute and while Nash netted for Cork three minutes later, another O'Donnell goal then helped Clare moved into a 3-9 to 1-7 lead, with free-taker Colin Lynch having scored five of the Banner points.

However, Cork finished the first half with four unanswered points which cut Clare advantage's to only four.

With Clare's shooting becoming somewhat errant and manager Fitzgerald feeling his team were getting a raw deal from the match officials, Cork fought to level the contest by the 52nd minute.

Clare rallied again to lead by three but the feeling that they were set to be denied in heartbreak fashion increased with Harnedy blasted into an empty net in the 60th minute.

But then came McGrath's moment of brilliance as he ran through the Cork defence before hammering an unstoppable shot past Nash.

Moylan's goal in the opening seconds of injury-time gave the Banner fans palpitations but Honan's determination to get his name among the goal-scorers was rewarded as he scrambled the ball past Nash in the final play of the game.