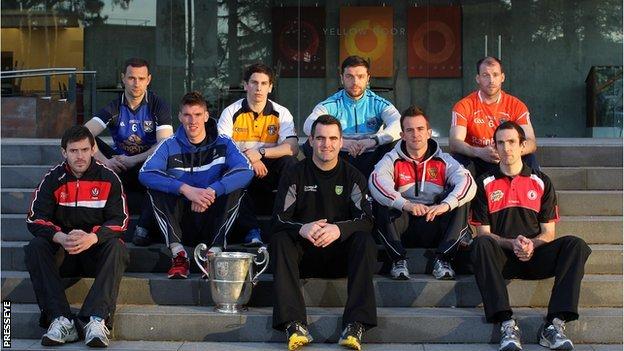 Tyrone have been drawn to face Down in the preliminary round of the 2014 Ulster Senior Football Championship, with the winners playing Monaghan.

The county which emerges from that quarter-final will play Armagh or Cavan who meet at the last eight stage.

Donegal will be favourites to emerge from the top half of the draw but must first overcome Derry in the last eight.

Fermanagh play Antrim in the quarter-finals, with the winner of that tie playing Derry or Donegal in the semis.

Holders Monaghan therefore face a difficult route to the final if they are to successfully defend the title which they won by beating Donegal in July.

If Mickey Harte's men emerge victorious from their opener, the Red Hands will set up a repeat of this year's All-Ireland quarter-final with Monaghan, which they edged by 0-14 to 0-12.

The dates, venues and throw-in times for the games will be decided at a future date.

Meanwhile Antrim will be involved in a qualifying group, along with Carlow, Laois, London and Westmeath, in the Leinster Senior Hurling Championship.

The winners of that group will play Wexford at the quarter-final stage, with the runners-up taking on Galway.

In the Munster hurling championship, there will be a repeat of this year's All-Ireland Final between Clare and Cork at the semi-final stage if the Rebel County win their preliminary-round clash against Waterford.

In the Football Championship, this year's All-Ireland winners Dublin will face either Wicklow or Laois in the Leinster quarter-finals.

This year's beaten All-Ireland finalists Mayo must travel to the US for their Connacht preliminary-round clash with New York.

London, this year's beaten Connacht finalists, will face Galway in the quarter-finals.

In the Munster Football semi-finals, Kerry will face either Clare or Waterford with Cork taking on Tipperary or Limerick.

Monaghan v Tyrone or Down

Armagh or Cavan v Monaghan, Tyrone or Down