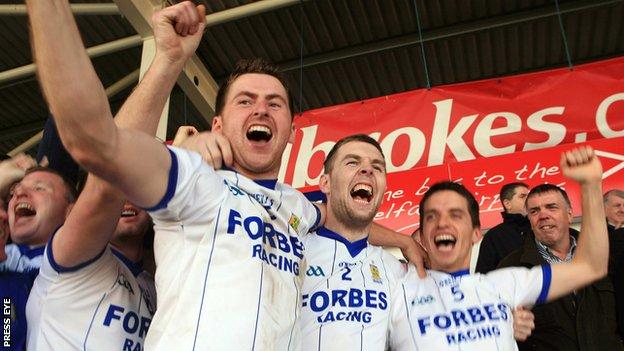 Ballinderry and Roslea are strong favourites to land the Derry and Fermanagh Football titles on Sunday.

Ballinascreen will be Ballinderry's opposition in the Derry decider at Celtic Park (15:30 BST).

Ballinderry are aiming for their third straight Derry title while Ballinascreen while be playing in their first Derry final since 1994.

Roslea will be looking for their third Fermanagh title in four years in the Brewster Park decider (15:30).

In contrast Belcoo have never won the Erne county senior title and their last appearance in the decider was a quarter of a century ago.

Roslea's team includes attacking brothers Seamus and Sean Quigley who bagged 1-9 of their 2-11 total in the semi-final win over Ederney.

Peter McGinnity's side can also call upon the likes of James Sherry, Niall Cosgrove, Shane McMahon, Shane Lynch and Peter Sherry who is back in action for the Shamrocks this season after winning a London county medal with Tir Chonaill Gaels last year.

Belcoo went into the 2013 campaign having not won a championship game in eight years but that all changed with their surprise first-round win over Lisnaskea.

Damien Gormley's side then accounted for Erne Gaels in the quarter-finals before stunning Derrygonnelly in the last four.

That was a win over a Derrygonnelly club who had stopped Roslea's three-in-a-row bid at the very first hurdle in 2012.

In addition, Belcoo fans will be hoping that Glenavon soccer player Shane McCabe will also be available to make a contribution in Sunday's decider.

Ballinascreen's march to the Derry decider has included wins over Slaughtneil, Dungiven and semi-final opponents Coleraine, where a replay was required.

The Ballinascreen game plan has been built around a tight defence which is marshalled by Dermot McBride.

But Mickey Boyle's side have also shown attacking attributes this season - particularly in the shape of Derry star Benny Heron who has scored six goals in the campaign.

Young Derry forward Ryan Bell has been the standout Ballinderry performer during most of their run to the final but veteran attacker Conleith Gilligan took the majority of the semi-final plaudits after notching 2-9 of the 2-20 total in the 15-point romp over Lavey.

The emergence of other stars such as Gareth McKinless and Lee Martin means the Ballinderry manager Martin McKinless may be to afford to leave Enda Muldoon on the bench although the big man will surely feature of some stage of the contest.

The Derry final may prove closer than some pundits are predicting but Ballinderry should complete a three in a row.