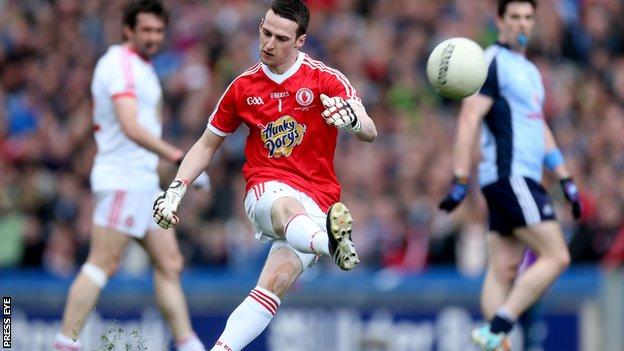 Tyrone goalkeeper Niall Morgan is the surprise inclusion in the Ireland squad for the International Rules series against Australia later this month.

His Tyrone team-mate Sean Cavanagh, and Darren Hughes and Conor McManus from Ulster champions Monaghan, are among the nine Ulster players called up.

Former All Star full back Neil McGee and Paddy McBrearty are the other Donegal players involved.

Down's former All Star defender Kevin McKernan has not been considered, despite featuring prominently at a number of training sessions.

Ireland manager Paul Earley explained that the medical team advised him that bruising on McKernan's knee is 'likely to be exacerbated by training for both his club and the Irish team'.

McKernan's club Burren are due to play in the Down county final on 20 October and there are a number of other players facing club v country dilemmas over the next few weeks.

Ireland captain Michael Murphy faces a similar conflict, as Glenswilly have qualified for the Donegal county final, which is also fixed for 20 October.

Eyebrows will be raised at the selection of Morgan, who has had less than six months experience at inter-county level.

He impressed in his rookie season with Tyrone, most notably winning the man of the match award in the League final defeat to Dublin in April.

With regular Ireland 'keeper Stephen Cluxton one of several Dublin players who did want to be considered for the series, Morgan has an excellent chance of playing.

A total of fifteen counties are represented on a training panel of 29 that is expected to be cut back ahead of the opening test at Breffni Park on 19 October.

Mayo have the largest single representation on the panel with four followed by Cork, Donegal, Laois and All-Ireland champions Dublin who all have three each.

Galway, Tyrone and Monaghan have two each selected while Kildare, Derry, Westmeath, Armagh, Louth, Meath and Wexford are also represented.

Zach Tuohy (Carlton / Laois) is the only AFL-based player in the panel.

"Training has really stepped up in recent weeks with the inclusion of players from both of the All-Ireland finalists," said manager Earley.

"We have a great response from players both in coming to join the panel and in training and we are pleased with the progress made to date.

"Injury has prevented a number of players from making this panel but we are very pleased with the group of players we are working with and very much looking forward to the two games."

The second test takes place in Croke Park on 26 October.