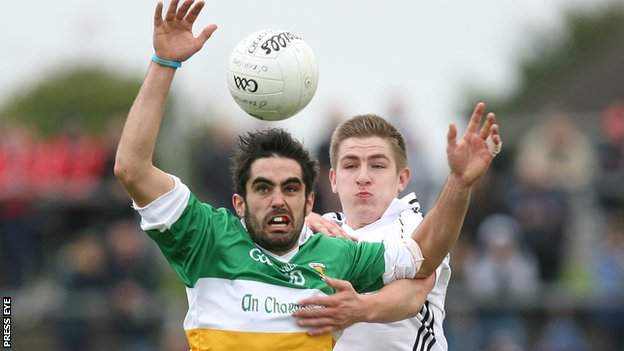 A five-point win over record title winners Carrickmore sets up an Ulster Club Championship preliminary-round clash with Ballinderry next weekend.

Paul Coney, Danny McNulty and PJ Lavery all hit the net to put the game beyond Carmen's reach in a thrilling decider.

Tyrone star Connor McAliskey stamped his class on the game with a couple of brilliant scores for Clonoe.

He also won the free that Stephen McNulty tapped over for a 0-3 to 0-1 lead after nine minutes.

Martin Penrose pulled back a point, but Clonoe hit the net in the 12th minute, and again McAliskey was heavily involved.

He collected Ryan T O'Neill's delivery to pick out Paul Coney for a simple tap-in and a four-point lead.

However, Carrickmore responded with Penrose tapping over a couple of frees, before wing back Ruairi Loughran thumped over a delightful equaliser, sending his side in level at 0-6 to 1-3 at the break.

Danny McNulty bagged a second Clonoe goal just 10 seconds into the second half, rising high to field Ryan T O'Neill's long ball and plant a low shot in the corner of the net.

But Carrickmore's patience saw them work the ball into scoring positions, by-passing Clonoe's sweeper system, and they went back in front through Mickey McCallan.

However, Clonoe grabbed a third goal, McNulty slipping a pass to wing back PJ Lavery, who rifled to the net midway through the second half.

Back came Carrickmore again for Niall Loughran and Paul McAleer to hit the target, but a couple of late frees from Stephen McNulty sealed it for the O'Rahilly's.

There was a big surprise in the Cavan football decider as Ballinagh clinched the club's first ever senior county title as they shocked Cavan Gaels 0-12 to 0-11.

The sides were level at 0-3 to 0-3 after 12 minutes but four unanswered scores helped Ballinagh move into a 0-8 to 0-5 lead by half-time, with Padraig O'Reilly and Niall O'Reilly among the scorers.

Cavan Gaels fought back and looked the more likely winners when Micheal Lyng's score levelled the contest at 0-10 to 0-10 with seven minutes left.

However, points from Thomas Moore and McDermott put Ballinagh back in control and Johnston's last-ditch 14-metre free was deflected over the bar to complete a shock success for the underdogs.

In Monaghan, Scotstown earned their first senior county title in 20 years as they hammered Clontibret 2-16 to 0-7 at Clones.

The sides were level at 0-4 to 0-4 midway through the second half but Scotstown dominated the second quarter to move 0-10 to 0-5 ahead by the break.

Any prospects of a Clontibret comeback was ended as Shane Carey flicked two goals to the net shortly after the break to increase Scotstown's lead to 2-13 to 0-6.

Clontibret's day went from bad to worse as JP Mone was sent off in the closing stages.

All Clontibret's scores came from Conor McManus while seven players were on target for Scotstown, who were clinching their 15th Monaghan title.

McManus was shackled by his fellow county star Kieran Hughes for much of the contest, in a surprise Scotstown switch while, his brother Darren also impressed for the winners.