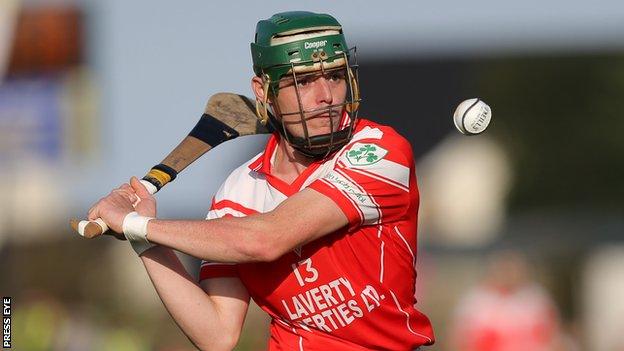 Loughgiel and Slaughtneil will contest this year's Ulster club hurling final on 27 October after their respective semi-final victories on Sunday.

Benny McCarry's goal helped Loughgiel lead 1-8 to 0-4 at the break and Gareth Johnson's goal was unable to inspire a Ballygalget rally.

Loughgiel, the 2012 All-Ireland club hurling champions, seized the early initiative through a goal from man of the match Benny McCarry after eight minutes.

Liam Watson hit a 20 metre free short to him and, with the Ballygalget defence napping, he drilled a low shot past Graham Clarke.

The goal gave Loughgiel a cushion they held on to for the remainder of the game.

Shay Casey scored twice from play in the first half with Liam Watson hitting 0-4, three from frees, to stretch the favourites' lead.

Ballygalget had a poor first half and trailed by 1-8 to 0-4 at the interval.

The Down champions were much livelier in the second-half and Gareth Johnson, the star of Down's Christy Ring Cup success this year, grabbed a goal back after 37 minutes.

Fellow Down player Danny Toner 0-4 in the second half but Loughgiel were always comfortable and were not flattered by the seven-point winning margin.

McCarry top-scored with 1-4 for Loughgiel with Watson contributing six points.