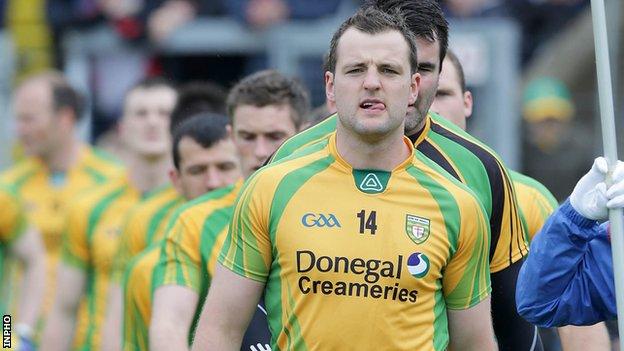 Donegal's Michael Murphy is to captain Ireland in Saturday's International Rules game against Australia despite his club final being set for Sunday.

Murphy, whose Glenswilly side play Killybegs in the Donegal club decider, is included in the 23-man squad named on Monday by manager Paul Earley.

There had been hopes that the club game might be moved to another date to allow forward Murphy to play in both.

Glenswilly manager Gary McDaid had said Murphy would be free to choose.

Saturday's first Rules game against Australia is being tsaged at Cavan's Breffni Park with the second match at Croke Park on 26 October.

Murphy is the first player from Donegal to captain Ireland in the series and he is joined in the squad by county colleagues Paddy McBrearty and Neil McGee.

"Reducing the numbers as we are obliged to do for match day was no easy task," said Irish boss Earley.

"Those who have made the shortlistconsider it a real honour to represent their country ahead of the challenge of playing some of the best players in the AFL.

"Our training has really stepped up in the last few weeks and we are looking forward to Saturday's first match and the support of a passionate crowd in Cavan."

The Australian squad will be only the second all-indigenous touring party in the country's sporting history.

The only other indigenous team to represent Australia overseas was the cricket team that played in England in 1868.