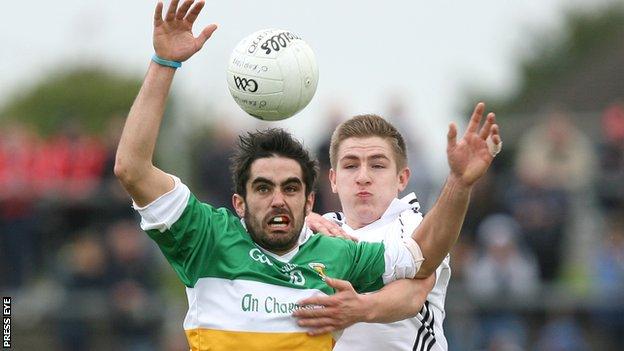 The biggest weekend in the club calendar thus far includes Clonoe's Ulster clash with Ballinderry and finals in Down, Armagh and Donegal.

Ballinderry are slight favourites to edge the Ulster tie against Clonoe at Celtic Park (15:30 BST).

Crossmaglen are odds-on to beat Cullyhanna in the Armagh final (17:30).

Michael Murphy's double-booking has dominated the build-up to Glenswilly's clash with Killybegs while Burren face Kilcoo in Down (both 16:00).

Immediately after Clonoe's Tyrone final win over Carrickmore last weekend, their manager Damien Cassidy claimed that the lack of preparation time for their Ulster opener against the Derry kingpins would put the O'Rahilly's outfit at a disadvantage.

That remains to be seen.

Ballinderry have plenty of stars of their own with Ryan Bell, Conleith Gilligan, Colin Devlin, Darren Lawn and Michael McIver all contributing to the team's heavy scoring this season and Kevin McGuckin as reliable as ever in the defence.

At the Athletic Grounds, Crossmaglen will aim for their 17th Armagh title in 18 seasons minus the retired Oisin McConville while Jamie Clarke is also unavailable as he is currently in the US.

With Paul Kernan and James Morgan also absent for Cross, the Jody Gormley-managed Cullyhanna will probably feel that they have a genuine chance of earning a surprise victory.

Cullyhanna fought back from seven points down at half-time in the semi-final against Ballymacnab to edge victory but it is difficult to envisage similar heroics this weekend.

The Down final at Pairc Esler may be a lot closer with Burren possibly marginal favourites after their 7-16 to 0-9 semi-final demolition of Saval.

It should be a competitive affair but Burren will edge victory if O'Hare and Shay McArdle can repeat the kind of form they have produced in recent games.

Michael Murphy will surely start for Glenswilly at MacCumhaill Park unless he picks up an injury in Saturday's International Rules First Test.

Killybegs have not won a league match this season but they produced a huge 14-man semi-final effort to beat Malin - earlier conquerors of holders St Eunan's.

However, the Fishermen will be without suspended midfielder Enda Murphy in Sunday's decider following his semi-final dismissal and he will be a major loss for Martin Boyle's team.

With Murphy out, there will be increased responsibility on his regular midfield partner Matthew Smyth while also influential Killybegs personnel include defender Jason Noctor and in-form forward Hugh McFadden.