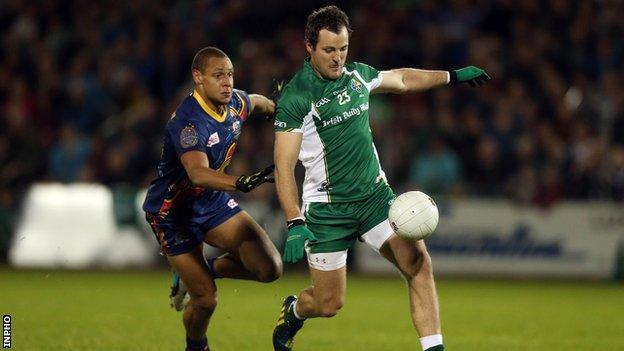 Ireland look to have an unassailable lead in the International Rules series after a 57-35 win in Saturday's first Test at Breffni Park.

The Irish led 17-4 after a scrappy opening quarter and the advantage was 28-9 at the halfway point.

Zach Tuohy's goal extended the lead to 38-14 but Jake Neade's six-pointer helped cut the margin to only nine.

However, Steven Motlop then missed a glorious goal chance for the Aussies as Kevin McLaughlin hit a late Irish goal.

Overall, the Breffni Park game will probably have done little to change the minds of those who believe that the plug should be pulled on the hybrid series.

Granted, over 17,000 turned up to watch the opening test at the Cavan venue, but there was little entertainment value over the opening two quarters as the Australian team, made up this year entirely of indigenous players, struggled to cope with the round ball.

In the past, the hybrid series has been dogged by violent scenes but there appeared little or no intensity in the opening 36 minutes of action with both teams struggling for fluency.

Michael Murphy, captaining the Irish even though he is required for duty in Sunday's Donegal county final, hit the game's two opening three-point 'overs' with Laois man Ross Munnelly also lively in the opening quarter.

The visitors only managed two scores in the opening quarter with captaining Daniel Wells registering a three-pointer.

A complete rout looked on the cards 12 minutes into the third period as Carlton Australian Rules player Tuohy ran through the opposition defence unchallenged to slot the game's first six-pointer to increase Ireland's lead to 38-14.

However, that prospect of a humiliation served to rally the Aussies as Eddie Betts dispossessed an Irish defender to set up Neade for a close-range finish under Meath goalkeeper Paddy O'Rourke.

Further Aussie three-pointers from Lewis Jetta and Alwyn Davey cut Ireland's lead to 39-27 by the end of the penultimate quarter and the margin was only eight after six minutes of the final period.

However, possibly the crucial moment of the night was Motlop's astonishing open-goal miss from two yards when a six-pointer would have cut the Irish lead to only six points.

After the escape, Ireland outscored the Aussies 17-4 in the final 12 minutes of action with Mayo man Kevin McLaughlin slotting Ireland's second six-pointer after the visitors had failed to deal with a wayward long free from Murphy.