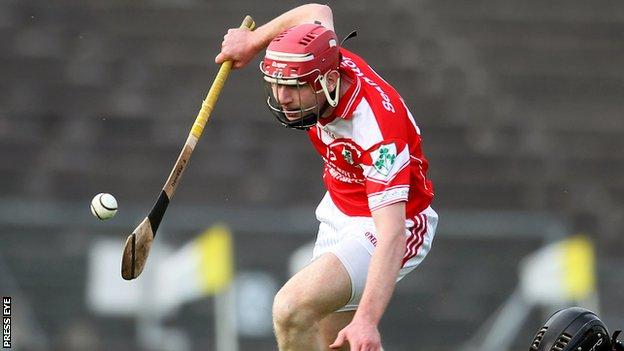 Loughgiel had to fight back from eight points down in the first half to subdue a hugely-committed Slaughtneil side in the Ulster Club Hurling decider.

Slaughtneil had Loughgiel severely rattled as Cormac McKenna's goal help them lead 1-6 to 0-1 after 15 minutes.

But two Eddie McCloskey goals steadied Loughgiel as Slaughtneil's lead was cut to four by the break at Celtic Park.

Shay Casey's goal levelled the game and the holders used their second-half wind advantage to good effect to pull away.

The Derry champions were not expected to unduly trouble the 2012 All-Ireland winners but the Emmet's outfit started like men possessed as they tore into the four-in-a-row seeking Shamrock.

Gareth O'Kane slammed over an immediate Slaughtneil free and further efforts from Gerard Bradley, the outstanding Chrissy McKaigue and O'Kane put them 0-4 to 0-0 ahead after seven minutes as they were making full use of the elements.

McKaigue was back in action less than 24 hours after lining out in Ireland's International Rules hammering of Australia at Croke Park.

Almost as impressive was his younger brother Karl who did an commendable marking job on Liam Watson whose contribution was largely restricted to pointing placed balls.

Watson did open Loughgiel's account with an eighth-minute free but a real shock looked in the offing as Slaughtneil responded with a further unanswered 1-2 with centre half-back McKenna lashing a 21-metre free to the net.

However, McCloskey struck a vital 19th-minute goal for Loughgiel from a tight angle to leave only five between the sides.

Then came a vital two minutes of play as firstly outstanding Loughgiel wing-back Odhran McFadden deflected another McKenna 21-metre free over the bar and McCloskey rattled in his second goal at the other end after being set up by Casey.

Slaughtneil still led by four at the break - 1-11 to 2-4 - but there was the feeling that Loughgiel's early crisis had passed.

Another O'Kane free did extend Slaughtneil's lead to three moments later but Loughgiel were soon on terms for the first time since the opening seconds as Casey netted from close range after an unselfish pass from McAuley.

A Tony McAuley point put Loughgiel ahead for the first time with 19 minutes remaining and the holders outscored Slaughtneil 0-7 to 0-3 during the remainder of the contest.

Slaughtneil didn't manage a score from play in the second period and they were forced to live off scraps as Loughgiel started to dominate possession.

A few questionable calls from Cavan referee Brendan Sweeney also possibly didn't help Slaughtneil's cause as the game started to slip away from them.

But to their immense credit, Slaughtneil didn't capitulate and Loughgiel needed to defend well in the closing five minutes to clear a couple of dangerous balls as the Derry champions chased the goal which would have given them a potential lifeline.