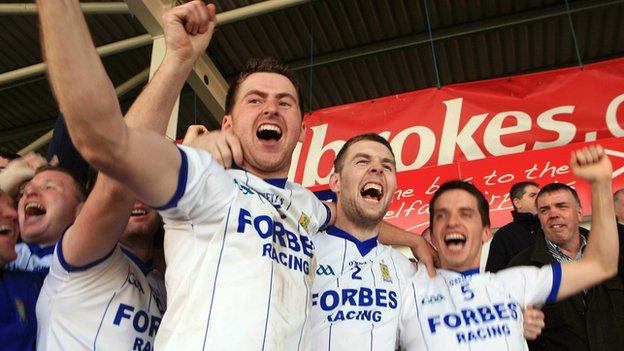 Derry champions Ballinderry will hope that experience wins the day when they face Monaghan counterparts Scotstown in the Ulster SFC quarter-final at Clones.

The Shamrocks side is crammed full of familiar names, including Kevin McGuckin and Enda Muldoon, who were part of their last Ulster win in 2001.

Conleith Gilligan will assume the role of main playmaker and the old hands are ably supported by some emerging talent.

Collie Devlin is another willing runner while James Conway is the main man at midfield, with Muldoon another proven option.

Kevin McGuckin is the crucial man at full-back, with Gareth McKinless at centre-back.

Scotstown will look to the energy and commitment of the Hughes brothers, Kieran and Darren, whose performances will be pivotal.

Michael Murphy is the biggest name in the Glenswilly line-up, but he will be ably supported by Neil Gallagher, Donegal's midfield anchor man, who won an All-Star last year.

Ciaran Bonner is another quality footballer while Gary McFadden, the team's centre half-forward, is regarded as one of the best club players in the county.

Wing-forward Leon Kelly played in this year's county Under-21 team and recently turned down an offer to join the senior squad.

Antrim defender Sean Kelly is a crucial figure for Glenswilly's opponents St Gall's, not only because of his defensive qualities, but also for his counter-attacking runs.

Either McFadden or Bonner will be pitted against Kelly and Sean Burke and Aodhan Gallagher will hope to boss the midfield for the Antrim champions.

Kilcoo start as rank outsiders against Crossmaglen in a repeat of last year's final at Newry.

Cross have lost the services of Oisin McConville, Jamie Clarke, James Morgan and Paul Kernan, but have been ably replaced by Michael McNamee, Danny O'Callaghan, Callum Cumiskey and Kyle Brennan.

This quartet all came on as subs in last year's Ulster final but the four of them will start on Sunday.

Fresh from winning their third Fermanagh title in four years, Roslea will be fancied to overcome Ulster newcomers Ballinagh, who secured the Cavan crown last month.

Ballinagh's chances would have benefitted from the absence of the Quigley brothers, Sean and Seamus, who form a dynamic forward duo for the Ernemen.

The siblings have contributed the vast majority of their scores in the championship this season, but both were red-carded in a Fermanagh league semi-final and looked likely to miss out.

An appeals panel ruled in their favour however, so the duo are able to line out at Brewster Park.

The showdown between former Fermanagh captain James Sherry and ex-Cavan skipper Padraic O'Reilly promises to be a thrilling one.