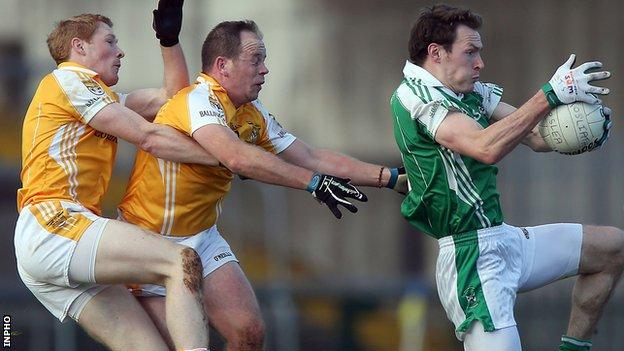 Fermanagh side Roslea are into the semi-finals of the Ulster Club Championship after beating Cavan team Ballinagh 1-12 to 0-11.

Brothers Seamus and Sean Quigley shared eight of Roslea's points in the first half as they led 0-9 to 0-4.

Ballinagh fought back to be just one point down, but a late Seamus Quigley penalty saw Roslea go through to face Glenswilly in the last four.

The Erne county men had Marty Beagan sent-off for a second yellow card.

Seamus Quigley ended with a personal tally of a goal and four points with Sean getting four points.

"We probably got a little complacent in the second half and Ballinagh certainly showed some fighting spirit," said Sean Quigley.

"It is 11 years since a Fermanagh team won in the Ulster Club and our target was just to get through.

"But Glenswilly have some top class footballers and we will not get away with any complacency against them."