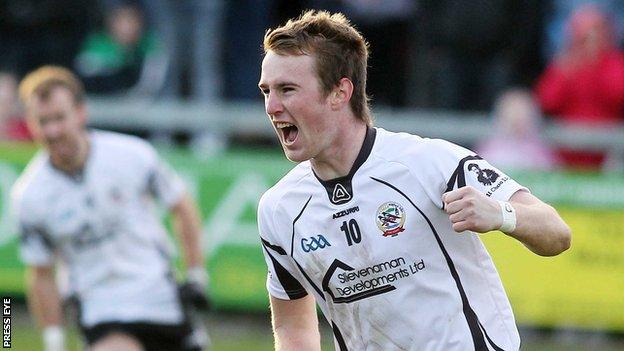 Kilcoo regrouped from losing a seven-point lead to beat Crossmaglen after extra-time in the Ulster Club replay.

The lifeline helped Cross force extra-time as Tony Kernan fired to the net.

However, goals from Ryan Johnston and Devlin put Kilcoo back in control as Cross duo Stephen Kernan and Paul McKeown were sent off late on.

Kilcoo thoroughly deserved a victory which avenged their Ulster Club Final defeat of last year after controlling proceedings for the vast majority of normal time.

With Niall Branagan, Paul Greenan and Darragh O'Hanlon among several impressive performers, Kilcoo looked to have put the game to bed by the 40th minute as Devlin's 38th-minute goal was followed by a James McClean point to increase their lead to seven.

However, Daryl Branagan's dismissal after his apparent strike on Stephen Kernan turned the game on its head during the remainder of normal time as Cross hit 1-4 without reply helped by Tony Kernan's deflected goal.

Even after Martin Aherne's point had levelled proceedings at 1-7 apiece, Kilcoo still should have won the game in normal time with O'Hanlon and substitute Jerome Johnston missing great point-scoring chances.

That Kilcoo, despite being back to the full complement of 15 players, managed to regain their nerve in extra-time speaks volumes for their fortitude.

To be fair to Crossmaglen, they went into the game severely under-strength with Aaron Kernan and David McKenna among several players ruled out by injury and Jamie Clarke missing because of his travels abroad.

With Oisin McConville's reliable free-taking also no longer there, Cross struggled badly for scores in the first half with Tony Kernan missing a couple of straightforward chances from placed balls.

O'Hanlon hit an opening free for Kilcoo and he then set up a fine score for his half-back partner Gerard McEvoy.

Tony Kernan did open Crossmaglen's account in the 13th minute but Kilcoo pushed on to lead 0-5 to 0-2 at the interval with Ryan Johnston content to hit their fifth point a minute before the break after Laverty had presented him with the sniff of a goal chance.

Kilcoo looked in total control eight minutes into the second half as Paul Devlin lashed a penalty to the net after Stephen Kernan had hauled down Conor Laverty as the Down star appeared set to find the net.

The Down club's lead was increased to seven two minutes later after substitute McClean swung over a glorious point.

But Daryl Branagan's 43rd-minute dismissal gave Cross a glimmer of hope and they responded with unanswered points from Tony Kernan, substitute Aaron Cunningham and Callum Cumiskey.

Cross suddenly looked favourites when Kernan's deflected goal left only a point between the teams with eight minutes of normal time left after good work by Kyle Carragher and Cumiskey.

Sure enough, Aherne strode upfield to level a minute later as Kilcoo seemed set to snatch defeat from the jaws of victory.

The sense that Kilcoo were about to miss the boat for the second time in a week only increased as O'Hanlon and sub Johnston missed glorious chances to win the game in the closing seconds of normal time.

But while Carragher did put Cross ahead for the first time in the contest at the start of extra-time, Ryan Johnston blasted in a glorious goal seconds later after a superb run from O'Hanlon.

Kilcoo were on their way to a semi-finals eight minutes into the first period as Laverty's clever work set up a second goal for Devlin.

O'Hanlon, Niall McEvoy and Devlin hit the three remaining posts as Crossmaglen had Stephen Kernan and McKeown sent off.

Kernan retaliated after being the victim of a rugby-type tackle by Laverty while McKeown's frustration also boiled over with him also seeing red as Kilcoo progressed to a semi-final meeting with Ballinderry next weekend.