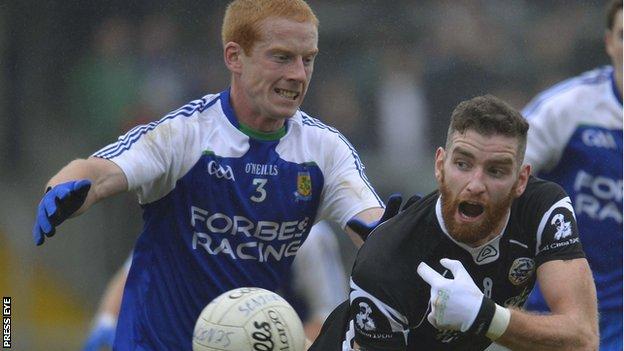 Both teams ended with 13 men as Ballinderry beat Kilcoo 1-10 to 0-9 in an incident-packed Ulster Club semi-final in Armagh.

Michael McIver got the goal and the Derry men were in control when they had Kevin McGuckin dismissed after a clash with Ryan Johnston before half-time.

The gap was three points late in the game when Kilcoo's Johnston and Paul Greenan picked up second yellow cards.

After an exhausting two games against holders Crossmaglen Rangers in the quarter-finals, Kilcoo were always second best against a stronger Shamrocks side.

Ballinderry, seeking their third Ulster Club title, were last in the final in 2008 when they lost out to Cross.

"Every year we go in full of hope and expectation, but on the last couple of occasions we have come up short in the Ulster," said seasoned Ballinderry man Conleth Gilligan.

"But we have worked harder this year and we are where we want to be.

"We have a great bunch of lads and they deserve some success because they put so much effort in."

Although Kilcoo's free-taker Darragh O'Hanlon landed the first point of the match, Ballinderry went on to dominate.

Full-forward Ryan Bell kicked a super score to level and McIver and Gilligan pointed from play to establish a lead.

Then came the goal with Daniel McKinless racing through to feed McIver who rounded the keeper to score.

Dermot McGuckin and Bell tagged on further points for Ballinderry with O'Hanlon and Paul Devlin, the two-goal in the replay win over Cross, replying for the Down team.

McGuckin was shown the red card after referee Martin Higgins consulted a linesman on the clash with Johnston.

Conor Laverty got the next point for Kilcoo to leave them four points down but with the numerical advantage.

However, Gilligan steadied the ship for Ballinderry by landing their first score for 13 minutes.

Boosted by two Collie Devlin frees, Ballinderry were 1-8 to 0-5 up and seemingly in little trouble when Scott was ordered from the field.

Collie Devlin slotted over another free, but then came the Kilcoo response with Darragh O'Hanlon, Sean O'Hanlon, Sean Devlin and Paul Devlin scoring without replay.

That meant Kilcoo were just a goal down, but with a two-man advantage.

However, the dismissals of Johnston and Greenan, plus McIver's stoppage-time insurance point meant Ballinderry are through to face Glenswilly in the final on Sunday, 1 December.