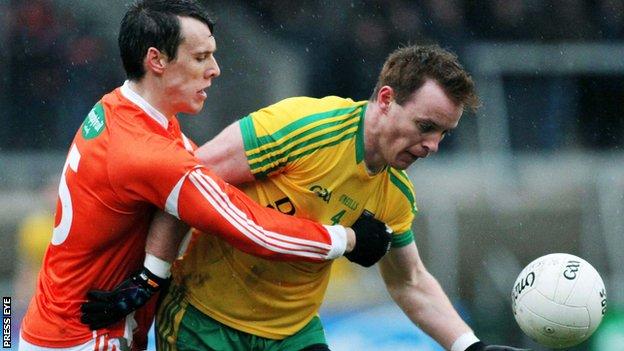 Holders Tyrone beat Queen's 3-19 to 1-08 to put themselves in pole position to reach the McKenna Cup semi-finals.

In Sunday's other Section A fixture, a Colm McFadden goal proved crucial as Donegal fought back from five points down to beat Armagh by 1-10 to 0-11.

Armagh had led 0-7 to 0-3 at the interval at the Athletic Grounds.

In the game at Healy Park, two of Tyrone's goals came from debutants, Danny McNulty and PJ Lavery, both from county champions Clonoe.

The sides were level on eight occasions before the Red Hands displayed their quality to pull clear in the second half.

Queen's started brightly with a couple of Ryan Murray points, but were rocked by a Tyrone goal in the eighth minute, debutant Danny McNulty finishing to the net from close-range after Peter Hughes, Connor McAliskey and Niall McKenna had combined.

But the students responded with a Ryan Rafferty goal three minutes later, and were level when Rory Grugan landed a long-range point.

It was a tightly-contested opening half, with Murray and Ryan Rafferty again on target for QUB, while McAliskey and debutant Patrick Quinn hit Tyrone points.

It was Queen's centre back Darren O'Hanlon who brought the sides level on 1-6 each in stoppage time.

Once they got the wind in their backs, Tyrone eased clear with scores from McNulty, McAliskey and Peter Hughes, although they needed a superb block from Hugh Gallagher to deny Harry Og Conlan a goal.

Ronan O'Neill came off the bench to slot over a couple of delightful scores as the home side weased into a six points lead with less than a quarter of an hour to play.

McAliskey brought his tally to four, and his Clonoe club-mate PJ Lavery capped a fine debut with his side's second goal, before Paddy McNeice netted a third, Queen's held scoreless for the final half-hour.

Armagh opened up a five-point gap entering the final quarter, with Eugene McVerry, Stefan Campbell and Robbie Tasker on target.

Donegal dug deep, with Colm McFadden producing the only goal of the contest entering the closing 10 minutes, a score which proved crucial for Jimmy McGuinness's side.

McFadden's initial shot was saved, as was the follow-up, but on his third effort he finished the ball to the net to cut the gap to a point.

A brace of Michael Murphy points, plus scores from Odhran MacNiallais paved the way for the visitors to win.