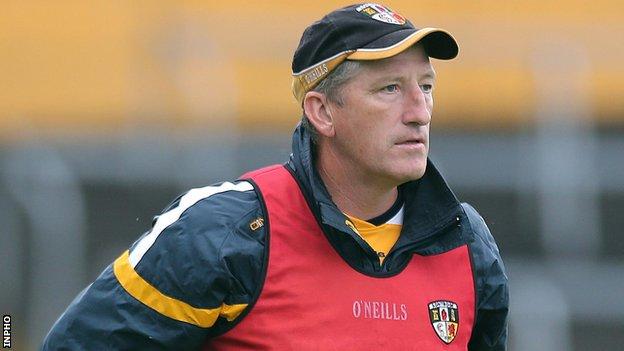 A strong second half showing by Offaly saw the Midlanders beat Antrim by 1-17 to 0-14 and secure a place in the Walsh Cup quarter-finals against Galway.

Ahead by 0-9 to 0-3 approaching half-time, the Saffrons, who fielded seven of the side which started last September's All-Ireland Under-21 final, lost their way on the re-start.

Antrim began the game brightly and led by 0-2 to 0-0 after just three minutes, following early scores from Daniel McKernan and Ciaran Clarke.

Kevin Connolly opened Offaly's account in the seventh minute, but the Saffrons exerted their dominance at midfield and made this count.

The visitors moved 0-6 to 0-2 ahead after 18 minutes, with Jackson McGreevy, Stephen McAfee (2) and Barry McFall on target.

Offaly rallied, with Sean Cleary and Bergin working hard, but Neil McManus, McFall and Clarke were on target before the break to ensure a 0-9 to 0-5 interval lead.

The hosts continued to show great work-rate on the restart and took the lead for the first time entering the final quarter, after defender Derek Morkan put Offaly 0-13 to 0-12 ahead.

A mix-up in the Antrim goalmouth saw defender McKinley flick the ball to his own net, to hand Offaly a 1-13 to 0-12 advantage.

Offaly were totally on top at midfield at this stage, and kept motoring until the finish.