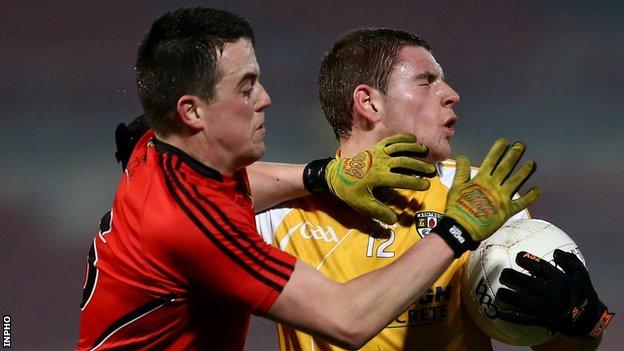 Antrim's 1-12 to 0-10 win over Down wasn't enough to earn the Saffrons a McKenna Cup semi-final but it was still a very pleasing night for Liam Bradley.

The exchanges were tight early on but Paddy Cunningham's goal moved Antrim 1-3 to 0-4 ahead and they pushed on to lead 1-9 to 0-6 by the interval.

Down hit three unanswered points after the break but Antrim reasserted themselves to regain control at Newry.

Cunningham finished with 1-3 with CJ Gourty also among the scorers.

Liam Bradley's side were outsiders with the bookmakers heading into this encounter but showed desire under the Newry floodlights to carve out a five-point win.

Liam Doyle and Aidan Carr were on target for Down early on while Niall Madine hit the Mourne County's last two scores of the opening period.

Bradley emptied the Saffrons bench on the restart, with Justin Crozier, McGourty, Tomas McCann and Brian Neeson introduced in the second half, with goal-scorer Cunningham among those to make way.

Down cut the gap to a goal on a 1-9 to 0-9 score-line with Doyle, Darragh O'Hanlon and Madine notching the scores but Antrim came good in the final quarter with McGourty, Mark Sweeney and Neeson all slotting points.

The only negative for the Saffrons was an injury suffered by former London player Sean McVeigh who was replaced by Conal Kelly late on.