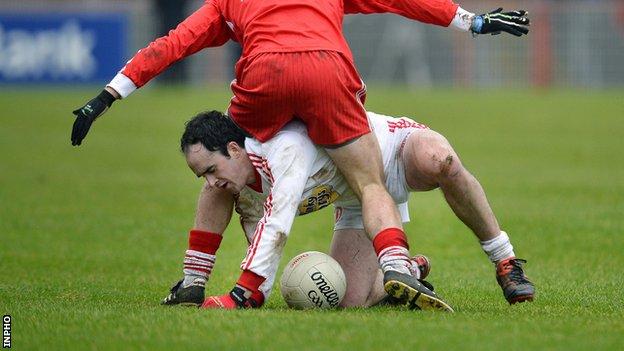 Mickey Harte's side routed Armagh 5-16 to 0-7 on Wednesday but the Tyrone boss makes 10 changes for Sunday's game.

Sunday's other semi-final sees Ulster champions Monaghan in a derby clash against Cavan at Enniskillen (14:00).

Harte has used the season-opening competition as an opportunity to look at all his squad and he has been making sweeping changes match-on-match.

Those handed starts on Sunday included Clonoe keeper Mickey O'Neill who takes over from Niall Morgan.

Thomas Mallon replaces Eoin McNicholl in goals with Michael McShane and Charlie Kielt taking over from Damien Brown and James Kearney in defence.

Cavan and Monaghan have yet to name their line-ups for the other semi-final.

The game is a repeat of last year's Ulster semi-final when the Farney County edged a 1-10 to 0-12 victory.

Conor McManus hasn't featured thus far in the McKenna Cup and is unlikely to get any action at Enniskillen though Martin Dunne could be handed his first start of the season.