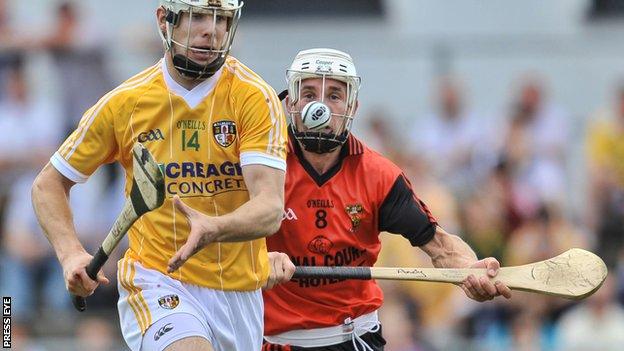 The much delayed 2013 Ulster Senior hurling final between Antrim and Down has been rescheduled for Sunday 2 February, 2014 at Celtic Park.

The match is now set to take place on the same day that Antrim begin their Football League campaign and just a week before Loughgiel play their All-Ireland club hurling semi-final.

The game was originally scheduled to be played on Sunday 7 July, 2013.

It was then rescheduled for 3 November, before being postponed again.

This is because the November date fell during the closed inter-county period.

The GAA introduced the closed autumn and winter period for county teams a number of years ago in an attempt to reduce player burnout.

The final was originally put off from its July date because that day was required for Down's semi-final replay with Derry.

Antrim captain Neil McManus admitted the reasons for the original postponement were "largely unforeseen" and the fixture had fallen victim of "a crowded fixture calendar".

"Hopefully steps can be taken to ensure that it doesn't happen again and we can see something of a resurgence in Ulster hurling," said McManus.

"The Ulster Hurling final is normally a really enjoyable thing to look forward to but the gloss has certainly been taken off it now.

"It would have been nice to play the final with last year's panel and in the height of summer but now we're just using it as preparation for the National League and Down will do likewise."