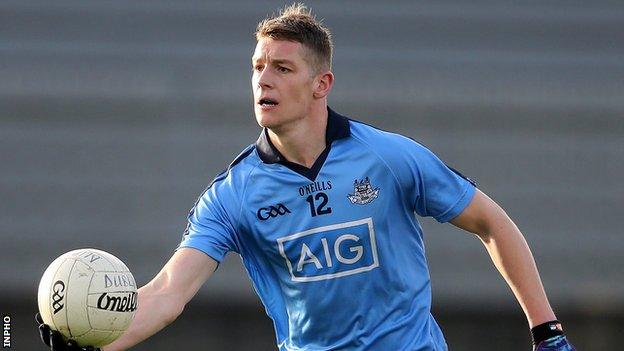 Dublin forward Jason Whelan has been banned for eight weeks after the Leinster Council investigated an allegation of biting in a recent O'Byrne Cup match.

The Leinster Council said the ban had been imposed after Whelan was founded to have "inflicted injury recklessly".

The Leinster statement added that both Dublin and the player had indicated that they would accept the sanction.

The incident happened during the game against DCU on 12 January.

Because the O'Byrne Cup is a provincial competition, Whelan was handed a time ban rather than match suspensions which govern inter-county league and championship games.

Whelan is not a regular in the Dublin team although he did come on as a substitute in last year's League Final win over Tyrone.

The conclusion to the Leinster Council investigation follows criticism by the GAA's director-general Paraic Duffy of the way both Dublin and Donegal dealt with the controversy over the bite on Paddy McBrearty in last April's League encounter.

Duffy described that incident as one of the "low points" of 2013 and said it was "reprehensible that no one could be held to account for what happened".

The director-general said the act of biting was "primitive behaviour" which is "shocking and dangerous".