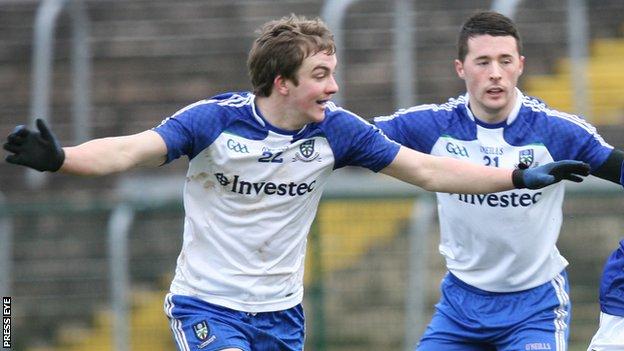 Down's Football League Division 2 opener against Monaghan scheduled for Newry on Saturday night has been put back until Sunday (14:00 GMT).

The decision to delay the game was taken following a pitch inspection on Saturday afternoon.

There are two other opening Division 2 games involving Ulster counties on Sunday afternoon.

Donegal will face Laois at O'Moore Park in Portlaoise with Armagh taking on Louth at Drogheda (14:00 GMT).

The team has plenty of experience but brothers Darren and Kieran Hughes and Conor McManus are among the absentees.

McManus, Owen Lennon and Vinny Corry are all named in the substitutes.

Down manager James McCartan has named a strong side and a number of players make their league debuts.

Donegal manager Jim McGuinness will parade a strong side in Sunday's game against Laois.

Martin McElhinney and the McHugh brothers, Ryan and Mark, who have been in Sigerson Cup action this week, return to the fold.

Notable absentees include David Walsh and Neil Gallagher while Patrick McBrearty is among the substitutes.

Armagh go into their opener against Louth severely depleted by injuries.

Aidan Forker was one of the latest to join the casualty list when he broke a rib while playing for St Mary's, while defender Ciaran McKeever continues to recover from a broken wrist.

Defenders Paul McKeown, James Morgan and Gary McCooey are also set to miss out, but Mark Shields is named in the starting line-up.

Midfielders Kieran Toner, Aaron Findon and Stephen Harold are absent, although Ethan Rafferty is included after recovering from injury.

Jamie Clarke will captain the side.

Armagh start their Division Two campaign in Drogheda on Sunday and they will be aiming to improve on their last outing, a 5-16 to 0-7 hammering by Tyrone in the McKenna Cup.