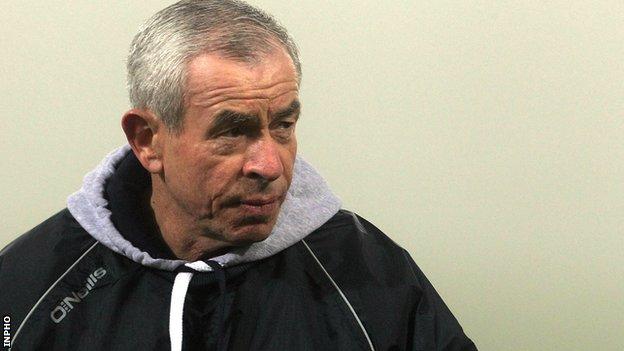 New Fermanagh boss Peter McGrath says relegation from Division Three of the Football League would be a disaster.

McGrath only took charge of the Erne County in November but is making no attempt to hide the setback that the drop to Division Four would represent.

"I would like to think, if we have all of our resources available and we apply ourselves properly, we can have a good league campaign," said McGrath.

McGrath's side open their campaign on Saturday against Cavan at Breffni Park.

After reaching last year's All-Ireland quarter-finals, and also progressing to the Dr McKenna Cup final, Cavan probably go into the new season as promotion favourites and McGrath knows that his Erne side look to be facing the toughest of openers.

"It is going to be a really hard game because Cavan have made enormous progress over the last three years with three Ulster Under-21 titles and an All-Ireland quarter-final last yea," said the two-times All-Ireland winning manager.

"They are really well organised and they have shown how to pick themselves up from a deprived position and put themselves, through hard work and good organisation, into a healthy and progressive position.

"It's a local derby and will be extremely tough. I will certainly know a lot more about my players come nine o'clock on Saturday night."

During his first year in charge in 2012, Peter Canavan steered the Erne County out of Division Four and they narrowly missed out on promotion to Division Two last season.

With experienced men such as Marty McGrath, Niall Bogue and Shane Lyons among a number of retirements and the likes of Shane McCabe and Daryl Keenan unavailable, Fermanagh don't appear to be among the promotion favourites this year and McGrath admits that he will be reasonably content if his team maintains its Division Three spot.

"If you were to say to say to me, 'you will be relegated', that would be disastrous," added McGrath.

"As far as objectives in the league are concerned, my view is that whatever league you are in, that is your level.

"If you were to say to me, 'you will stay in Division Three', I would be happy enough with that.

"If you were to say to me, 'you will be promoted', I would be delighted with that.

"You go from disaster, to happy enough to delight."

Several inter-county newcomers are likely to make their competitive debuts at Breffni Park although McGrath will be without key forward Seamus Quigley who has a hamstring injury.