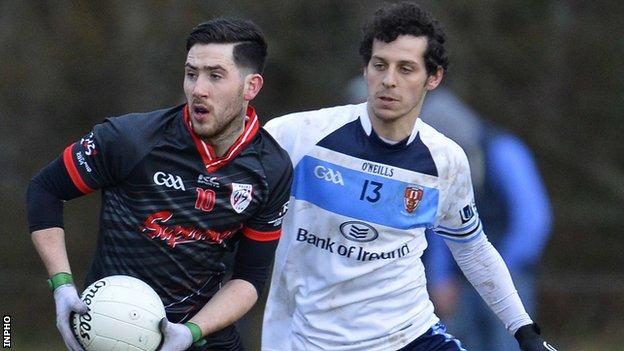 UUJ came back from a two-point half-time deficit to beat Sligo IT 1-15 to 0-11 in Wednesday's Sigerson Cup first round tie.

St Mary's facing a tough opener against to holders DIT, with the winners of that game taking on UUJ in the quarter-finals.

On Tuesday, finals weekend hosts Queen's battled past the University of Limerick 0-13 to 0-11 in their preliminary-round tie at the Dub.

The Belfast side led by a point at half-time and increased that margin to four midway through the second period.

However, UL then hit three unanswered scores to cut the QUB lead to the minimum but try as they might, the visitors were unable to get on terms.

The QUB victory sets up a first-round tie with Galway-Mayo IT next week.

Ryan Rafferty was among the Queen's scorers in the opening period with the impressive David Dolan on target for the visitors.

Points from Ryan Mallon and Ryan Murray helped Queen's move four ahead in the second period and they held on to win despite a couple of scores from UL's Kerry player James O'Donoghue.

If Queen's win next week, they will face either Maynooth or competition new boys IT Blanchardstown in the last eight.

As hosts, Queen's will have home advantage for all their games in the 2014 competition.

The higher education authorities have also ruled that St Mary's will forfeit any home advantage they have in the competition as punishment for an unfulfilled fixture in an intermediate league game.

Queen's are also hosting the Fitzgibbon Finals weekend on 28 February and 1 March.

(I) Athlone IT v UCD