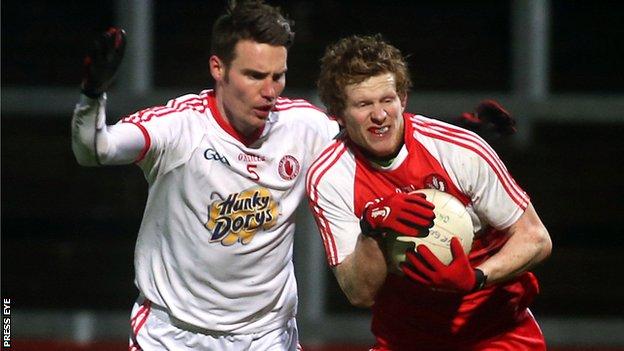 Derry fought back from seven points down early in the second half to earn a draw against Tyrone in Saturday's Football League Division 1 opener.

Both teams had late chances but Derry will feel they should have won.

The Oak Leafers bossed possession in the closing half hour as Patsy Bradley and especially Fergal Doherty took a firm grip on the midfield exchanges.

That was in marked contrast to the majority of the opening period with the Red Hands holding the edge in the middle third, helped by Grugan and early substitute Colm Cavanagh.

In front of some 5,000 spectators on a foul night in Derry, Grugan was one of four Tyrone players making their first League appearance with Barry Tierney, Shay McGuigan and PJ Lavery the other debutants.

With both managers opting to go man for man as opposed to employing sweepers, the game was an open affair for the most part and it could have featured several more goals.

After James Kielt's opening free, the Derry backline was marked absent in the third minute as the influential McCurry set up Grugan to score, with the midfielder delivering an emphatic finish.

Derry, however, regrouped with five unanswered scores as Emmett McGuckin offered an impressive outlet at full-forward and Enda Lynn picked off a couple of fine points.

But the black-carding of Tyrone midfielder Danny McBride actually aided the Red Hands as his replacement Cavanagh helped turned the contest during the remainder of the opening period.

After leading 1-6 to 0-7 at half-time, Tyrone's fast start to the second half appeared to have put the game to bed as McCurry's goal's increased their lead to seven, with him netting after charging down an attempted clearance from Derry keeper Thomas Mallon.

At that stage, an emphatic Tyrone win looked the likely outcome but to their credit, Derry regrouped to wrest back control for the remainder of the contest.

After points from McGuckin and half-back Aidan McAlynn, Derry missed a goal chance as Peter Harte and Morgan managed to deflect Doherty's goal-bound shot on to a post with McGuckin failing to gather the rebound.

Despite that miss, Derry refused to be discouraged and there was suddenly only two points between the teams in the 54th minute as O'Boyle palmed the ball home after a brilliant run from McGoldrick.

Tyrone looked to have steadied the ship as points from lively half-time substitute Ronan O'Neill and Grugan put them three ahead with 11 minutes of normal time left.

However, a couple of outstanding Doherty midfield catches rallied Derry and his own mid-range effort and two monster points from Gerard O'Kane and Lynch brought the sides level by the 64th minute.

A little more composure over the next five minutes would surely have resulted in Derry doing enough to win the game as they wasted good possession on a number of occasions.

Then in injury-time, it looked as if Tyrone might snatch victory but Grugan was wide with a difficult left-footed chance.