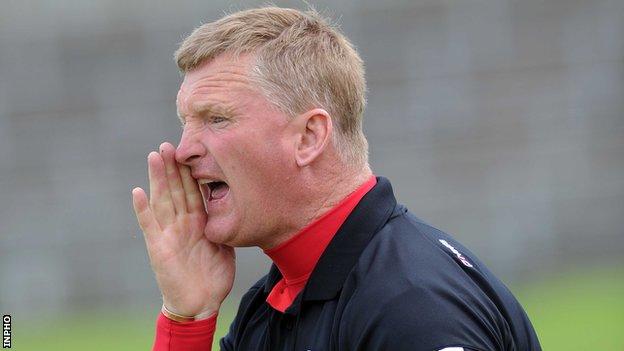 Down surrendered a six-point half-time lead as they were edged out 1-9 to 1-8 by Kildare in the Kehoe Cup semi-final.

Forced to play two games in 24 hours because of Sunday's 2013 Ulster Final, three Gareth Johnson points helped Down lead 0-7 to 0-1 at the break.

However, Johnson was then carried off in the second half with a leg injury.

With swirling winds prevailing, Down stormed to a 0-7 to 0-1 interval lead, with Paul Sheehan, Stephen Dineen, Daniel Toner and Caolan Baillie also on target.

A goal from Tipperary native Ray McLoughney cut the gap to a point on a 0-7 to 1-3 score-line after Johnson's injury had led to a long delay in play.

Kildare held a 1-6 to 0-8 lead on the stroke of injury-time and then extended their advantage to three but Conway's goal tied the game after 78 minutes.

Extra-time looked on the cards but Keegan struck the last-gasp free to book a final against either Derry or Meath.

Down will now have to regroup from Saturday's defeat in order to play Sunday's 2013 Ulster Final.

Sunday's 2013 Ulster Hurling Final will be moved from Celtic Park to Owenbeg if the pitch is unplayable following Saturday's Football League game between Derry and Tyrone.

The much-delayed Ulster decider has proved a major headache for the Ulster Council for over six months.

The latest controversy in the past week was Down's involvement in the Kehoe Cup semi-final.

And with the bad weekend weather forecast for this weekend likely to impact on pitches, the Celtic Park surface in Derry City could be well and truly chewed up following Saturday's Football League game.

Down are expected to field a weakened team for the provincial decider which were postponed twice last year and Johnson looks certain to miss the game after being injured in Saturday's game.