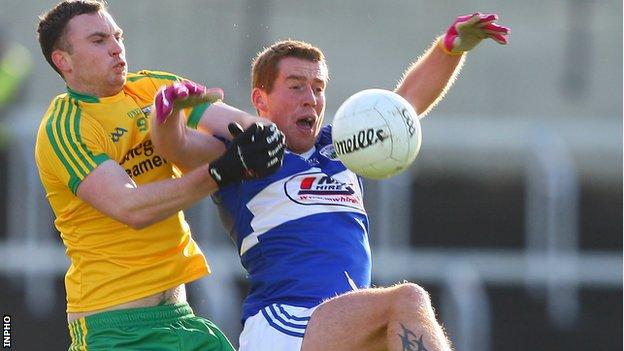 Donegal signalled their determination to make an immediate return to Division One with an impressive win over Laois.

A goal in the first half by Odhran MacNiallais and one after the break from Colm McFadden helped the Ulster side to a 13-point victory margin.

Laois were just 1-6 to 0-5 behind at half-time but Donegal ran away with it in the second period.

Denis Booth of Laois was sent-off for a poor challenge on Mark McHugh while John O'Loughlin got a consolation goal.

O'Loughlin's score did little to ease the frustration for Laois as they crumbled to a Donegal team eager to make up for last April's relegation.

Indeed, it took Laois 25 minutes to score in the second period and many of the local supporters had left O'Moore Park long before the final whistle.

Christy Toye put in an impressive performance for the visitors, winning lots of possession in the middle of the park, and in attack Michael Murphy scored six points, three of them frees.

Laois could have established an early lead but Evan McCarroll shot over for a point when a goal seemed a formality after he had rounded keeper Paul Durcan.

Instead, it was Donegal who got the opening goal when half-back Anthony Thompson advanced and set up MacNiallais to flick into the net.

Dermot Molloy fisted a point, while Murphy landed a superb 45 against the breeze and then added a point from play before the interval.

A thunderbolt of a goal by McFadden at the start of the second half put Donegal in command.

They were 2-7 to 0-5 up when the hosts were reduced to 14 men, corner-back Booth getting a straight red card for his neck-high challenge on McHugh.

Hugh McFadden, making his inter-county debut, scored two of Donegal's 13 points in the second half with Martin McElhinney getting a couple late on.

"We are happy with the two points and to have knocked up a good score," said Donegal boss Jim McGuinness afterwards.

"Some of our older players are coming back and we want to get them up to Championship level during this league campaign."