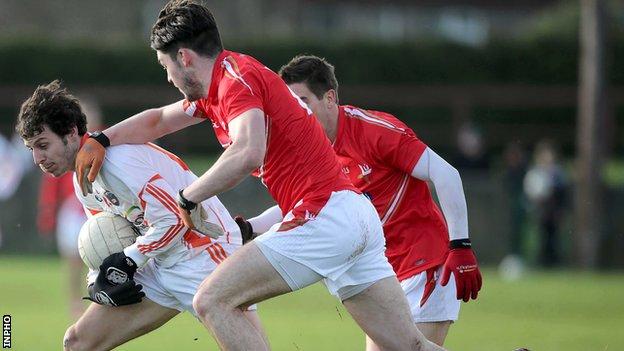 Armagh secured a precious Division Two point after a staging a remarkable comeback to hold Louth in Drogheda.

The Ulster men were nine points behind early in the second half but, boosted by a goal from Stefan Forker, they pulled an unlikely draw out of the bag.

Armagh managed just four points in the first half and soon after the restart they trailed by 14 points to five.

Forker's goal revived them and a series of points earned the draw with Tony Kernan's free being the final score.

"It was a serious comeback against a battle-hardened Louth team," said Armagh manager Paul Grimley.

"I always knew we had talented players but as well as that we need to hardened ourselves up for battles.

"That is what these league matches in February and March are all about, they're battles.

"We were looking at a disastrous and heavy defeat but we got back with the goal.

"Maybe we could have gone on and won the game, but we would have taken the draw at any stage.

"It will be a lot easier to face Down on Friday night after getting a point on the board."

Armagh had slumped to a heavy defeat at the hands of Tyrone last time out in the McKenna Cup and they looked to be heading for another hammering against Louth.

Brian Donnelly, Declan Byrne, Paddy Keenan and Derek Maguire got among the points as Louth established a firm grip on the contest.

Keenan and Colm Judge replied to seemingly extinguish the fight back, but Forker's goal prompted a spirited finish which saw Armagh secure the draw.