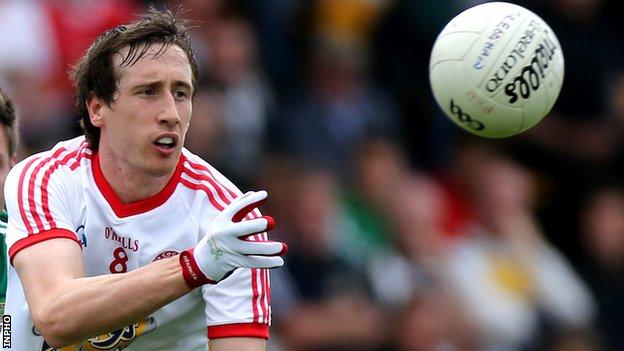 Colm Cavanagh will make his first start of the season for Tyrone as boss Mickey Harte makes five changes for Sunday's NFL Division One clash against Mayo.

Cavanagh comes into the Red Hands midfield for Danny McBride, for whom he was an early black card replacement in last weekend's draw with Derry.

Emmet McKenna, brother of defender Ryan, is one of two league debutants.

He comes into the half-forward line, while there is a first start also for Tiernan McCann at wing-back.

McKenna replaces Niall McKenna, who is ruled out by concussion after picking up a knock at Celtic Park, while Killyclogher prospect McCann is in for Ryan McNabb.

Also in attack, Peter Hughes replaces PJ Lavery and Ronan O'Neill, an extremely effective substitute against Derry, gets the nod ahead of Paddy McNeice.

Five-time All Star award winner Sean Cavanagh is likely to make his first appearance of the season, having been named on the bench.

There are nine changes in personnel from the Tyrone team that was defeated by Mayo in the All-Ireland semi-final last August.

The other player who started was Matthew Donnelly who moves from wing-forward to full-forward.

Mayo manager James Horan makes just one change to the side that narrowly lost out to Kildare last week.

Jason Gibbons comes into the side after impressing in Newbridge when brought on for the injured Tom Parsons.

Meanwhile, Derry have made three changes for Sunday's encounter with Kerry in Killarney.

Ciaran McFaul and Benny Heron make way for the pair, while Gerard O'Kane moves from attack to defence with Sean Leo McGoldrick making the switch in the opposite direction.