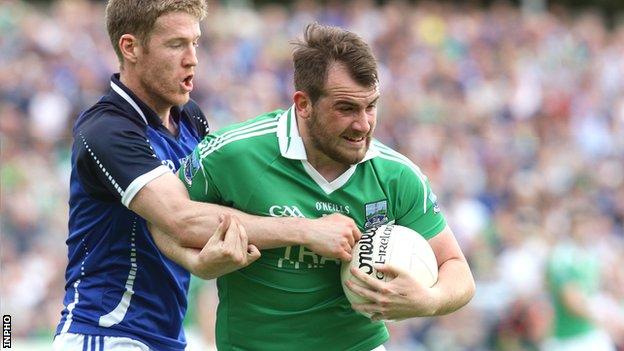 Quigley contributed 1-8 against a Sligo side who ended the game with 13 men as James Kilcullen and Caolan Cawley were sent-off in the second half.

The Ernemen trailed 1-7 to 2-3 at half-time, with Ryan Jones also finding the net for Fermanagh.

Mark Breheny scored the goal for Sligo who were second best after the break.

The first half was a closely contested affair but four points from Adrian Marron helped Sligo to a narrow one-point advantage at the interval.

Points from Quigley and Tomas Corrigan at the start of the second half nudged Peter McGrath's side in front and then Kilcullen was red-carded in the 43rd minute.

Points from Corrigan, Eamon Maguire and Quigley increased their side's lead, then Devaney replied for the visitors.

Quigley added a further five points, with Breheny and Marron scoring some consolation points for Sligo, who had beaten Limerick in their opening fixture last week.

Cawley's dismissal ended any hopes of a comeback.

"It was a big result for us to get two points and get off the mark," said McGrath after the game.

Prior to the match, Roslea pair Niall Cassidy and Seamus Quigley were removed from the substitutes' bench after playing soccer for local sides on Saturday.