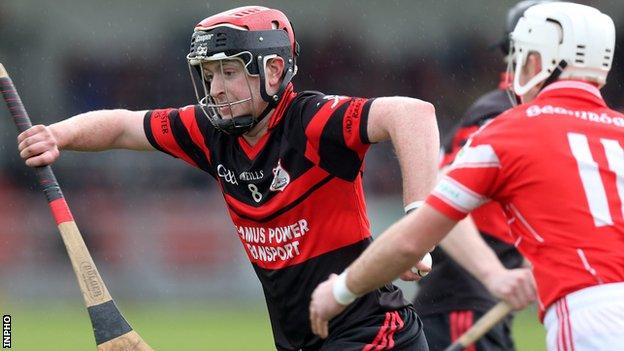 Loughgiel suffered the disappointment of losing by a single point to Mount Leinster in Saturday's All-Ireland Club Hurling Championship semi-final.

Second half goals from Benny McCarry and Liam Watson were not enough to halt the march of the Carlow champions, who won 0-18 to 2-11 at Pairc Esler.

Up front, Denis Murphy scored 11 points to inspire his side to a first ever appearance in the decider.

Martin Scullion and Barney McAuley had to be alert at the back to hold off a strong-running attack, and there was a let-off when Edward Byrne cut in from the left and unleashed a shot which DD Quinn did well to keep out.

Dead ball specialist Murphy kept the Leinster champions very much on the front foot, easing them in front early in the second quarter, and they enjoyed a sustained spell of pressure.

But a superb defensive effort from the Shamrocks kept the damage to the minimum, with Paul Gillan getting in a couple of vital challenges.

However, Murphy continued to hit the target from placed balls, and the Shamrocks were restricted to a couple of points on the breakaway from McCloskey and Watson.

Late in the half, Murphy struck a gem from play to ease his side into a 0-10 to 0-6 interval lead.

Murphy added to his tally immediately after the restart, and set up a point for John Coady as Loughgiel fell five points behind.

But Loughgiel got themselves right back in it in the 35th minute when Mark McFadden sent in the dropping ball that Benny McCarry fetched and drilled to the net.

Diarmuid Byrne, David Phelan and Murphy swept over scores at the other end to keep the men from the Glen on the back foot and chasing the game, but they went level in the 53rd minute when Watson finished Barney McAuley's delivery to the net.

Derek Byrne and Watson swapped points, and they were still deadlocked with five minutes to play.

Murphy's eleventh point nudged Mount Leinster back in front, and Loughiel had one last chance to send the tie to extra-time, but a transgression by Mark McFadden saw him pick up a second yellow card, and a scoreable free reversed.