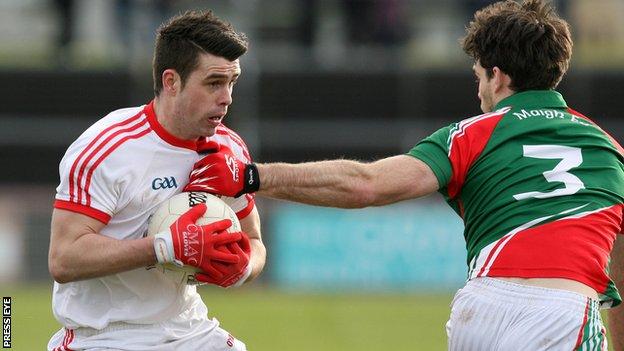 Two goals by Darren McCurry sent Tyrone on their way to a first win of their Division One campaign.

The young forward netted in each half, leaving All-Ireland finalists Mayo without a point after two games.

Mayo had led early on, but Tyrone took over with Mattie Donnelly, Ronan O'Neill, McCurry and Peter Harte all pointing before the opening goal.

Tyrone were 1-9 to 0-6 up at half-time and they added a goal and six to sit to complete a convincing victory.

It leaves the Red hands, the 2013 Division One beaten finalists, on three points from two matches.

"It is only February, but it is great to be motoring so well at this time of year," said Tyrone forward Mattie Donnelly who landed six points.

"The conditions were a bit better than they were last week and suited faster football.

"We executed the game plan well and it showed on the scoreboard."

Mayo, who beat Tyrone in last year's All-Ireland semi-finals, made an encouraging start by scoring points through Cathal Carolan and Keith Higgins.

But Tyrone's succession of points, capped by McCurry's first goal, had Mickey Harte's men six points to the good at the turnaround.

Mayo battled back in the second half with half-forward Adam Gallagher landing a string of scores to reduce the deficit to three points.

But Ciaran McGinley, turning down a possible goal option, pointed for the Ulster men and keeper Niall Morgan landed a trademark long-range free to get Tyrone back on track.

A good team move ended with Edendork man McCurry getting his second goal and Tyrone, with captain Sean Cavanagh on as a substitute, had six points to spare by the end.