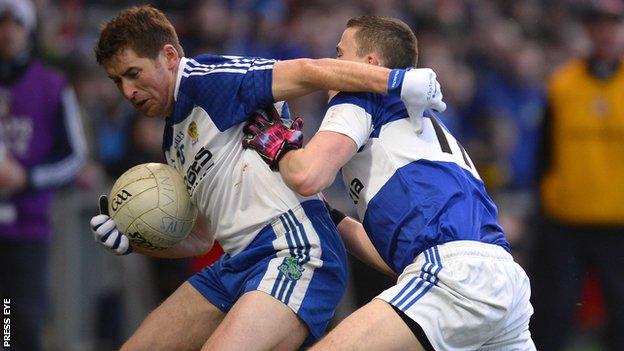 Tomas Quinn top-scored with a tally of 1-8 for the victors.

Quinn and Ciaran Dorney scored goals in the opening 11 minutes and St Vincent's led 2-4 to 0-9 at half-time.

The Mayo side defeated Dr Crokes of Kerry at O'Moore Park in Saturday's other last four clash.

Derry outfit Ballinderry went into the game aiming to secure their second All-Ireland title, following their first success back in 2002.

The Dublin champions had a dream start with those two early goals but Ballinderry fought back and the Ulster champions only trailed by a point at the interval.

In front of an attendance of 4,331, St Vincent's chose to play against the wind in the first-half and Quinn found the net in the seventh minute when his low shot through a crowded large square creeped inside Michael Conlan's right-hand post.

Quinn then delivered the pass of the match to Ciaran Dorney for Vincents' second goal four minutes later.

His defence-splitting pass completely took defender Kevin McGuckin out of the game and Dorney was able to pick the ball up and smash it into the roof of the net from a narrow angle.

St Vincent's had to withstand a brave recovery from Ballinderry who closed the deficit to just a point, 2-4 to 0-9 at half-time, with Collie Devlin hitting 0-4 from play for the Derry champions.

After a quiet first-half Diarmuid Connolly was superb after the interval hitting 0-3 from play and it looked as though St Vincent's would run out comfortable winners.

For the second time in the game, Ballinderry fought back through a McKinless goal, through a sea of bodies, after 48 minutes.

The closest Ballinderry got, however, was to within two points of Vincent's, who were composed front-runners.

Quinn's frees and points from Connolly and Dornay put them through to their first All-Ireland final since winning the competition in 2008.