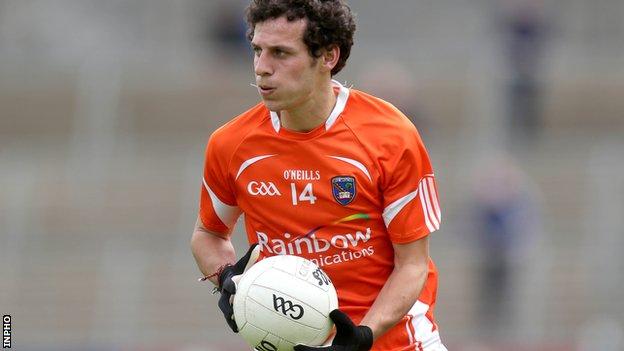 Ulster Interpros boss Joe Kernan has spoken of his disappointment at being unable to pick Armagh players for Sunday's semi-final against Leinster.

Kernan did intend to select Armagh trio Kevin Dyas, Ciaran McKeever and Jamie Clarke in his squad for Sunday's game at Navan.

"But I was then told that they had been asked not to join us (by the Armagh management)," Kernan told BBC Sport NI.

"It's a pity but there's nothing we can do about it."

Armagh are managed by Paul Grimley, who was then manager Kernan's assistant when the Orchard County earned the county's one and only All-Ireland Senior Football title in 2002.

However, Grimley quit Kernan's backroom team in 2006 a year before Kernan stepped down from the Armagh job.

Armagh have earned only one point from their opening two Football League Division 2 games and the county's management, which now also includes Kieran McGeeney, appear to believe that the Interprovincial competition would represent an unnecessary distraction at this stage.

In all seven of the nine Ulster counties will be represented at Pairc Tailteann.

Antrim's Kevin O'Boyle was also picked in Kernan's initial squad but will now miss the game after suffering a broken ankle in last weekend's Football League Division 4 defeat by Wicklow.

Ulster champions Monaghan have four squad members in the shapes of Rory Beggan, Colin Walshe, Conor McManus and Kieran Hughes while Derry trio Chrissy McKaigue, James Kielt and Sean Leo McGoldrick should go into the game on something of a high after last weekend's splendid League win over Kerry.

Ulster will be aiming to stay on course for a fourth successive Interprovincial title.