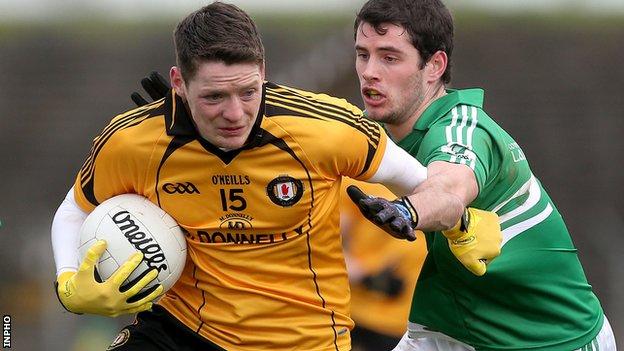 Two Michael Murphy frees deep into extra-time earned Ulster a 2-26 to 3-21 win in the Interprovincial semi-final against Leinster in Navan.

Paul Cribben netted as Leinster moved ahead but a late McManus point took the game into extra-time.

The Donegal ace claimed eight points in this high octane encounter, played in front of 200 spectators.

McManus registered a goal after just 36 seconds and this score kept Joe Kernan's side on top for most of the first quarter, until Leinster rallied with six unanswered points to take a 0-7 to 1-3 lead after 15 minutes.

Points from Murphy, captain Sean Cavanagh and Monaghan's Kieran Hughes helped Ulster to a 1-8 to 0-8 lead after 26 minutes, but Leinster again rallied.

Glynn's goal pushed them ahead after 28 minutes, and although Ulster took the lead on two occasions late in the half, an Eoghan O'Gara point tied the game at the break.

Leinster got the second half off to a perfect start with Kildare's Cribben netting a goal after 32 seconds, and Luke Dempsey's charges moved 2-14 to 1-11 ahead by the 41st minute.

Ulster worked hard and following a point from Tyrone's Darren McCurry they were level by the 66th minute at 1-19 to 2-16.

O'Gara pushed Leinster ahead, but a late McManus point made it 1-20 to 2-17 at the end of normal time.

Menton's goal helped Leinster to a 3-21 to 1-22 lead at half-time in extra-time, but amazingly his side wouldn't score on the restart.

Ulster tagged on 1-4 without reply, including a Harte goal, with Cavan's Eugene Keating impressive, and Murphy delivering two vital scores late on.

Ulster will meet Connacht in the decider after the Western province recorded a 3-19 to 2-16 win over Munster at Tuam Stadium.