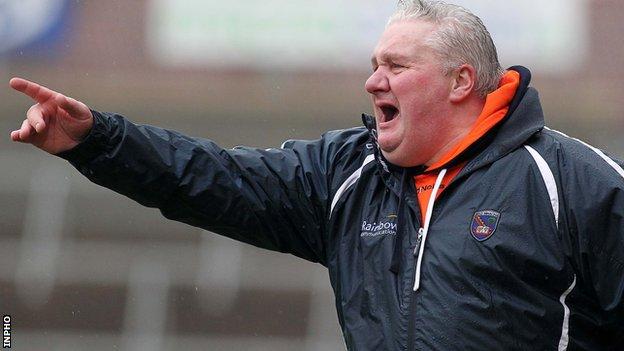 Armagh manager Paul Grimley has made four changes to his injury-hit team for the Football League Division Two clash with Meath at Navan on Saturday night.

The top two meet at Letterkenny on Sunday with leaders Donegal taking on Ulster rivals Monaghan.

Down sit third and the Mourne team face Louth in Newry on Saturday night.

Orchard captain McKeever is likely to miss the remainder of league campaign after sustaining a knee injury in training.

Armagh, who have picked up just one point from their two games, are one from bottom while Meath are in fourth.

Donegal and Monaghan have both named unchanged teams for their top-of-the-table clash.

The 2012 All-Ireland champions defeated Laois in their opener before recording an impressive win over Galway last time out.

The Monaghan attack does show one positional change with Conor McManus moving from centre half-forward to left full-forward and Christopher McGuinness switching to the number 11 shirt.

Monaghan impressively accounted for Meath in their last game after an opening draw against Down.

Meath edged out Galway 3-18 to 4-11 in their opening game before producing a very disappointing performance in the defeat by Monaghan and Mick O'Dowd has yet to name his team for the Navan game.

Down boss James McCartan has named an unchanged team for the game against Louth.

McCartan is likely to have Conor Laverty, Peter Fitzpatrick, Ambrose Rogers and Declan Rooney available in the coming weeks as they near a return to action but the Mourne county have lost Danny Savage and Connaire Harrison after both opted to go on a travelling stint abroad.

Louth let a nine-point lead slip against Armagh as they had to be content with a draw and a poor start led to their narrow defeat against Laois.

Aidan O'Rourke has made four changes from the defeat by Laois with Neil Gallagher, John O'Brien, Bevan Duffy and Eoin O'Connor introduced at the expense of Shane McCoy, Gary O'Hare, Brian Donnelly and Derek Crilly.