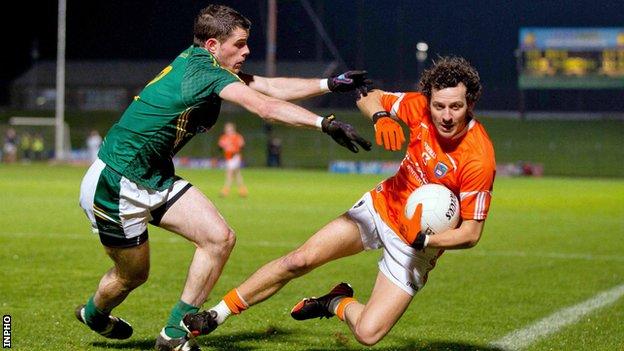 Jamie Clarke hit 11 points but there was a team of Armagh heroes as the Orchard men earned a superb Division Two Football League win over Meath.

Armagh looked in trouble as Meath led 1-4 to 0-2 after Philip McEvoy fumbled a Michael Newman shot over the line.

Newman's second goal then put Meath 2-4 to 0-5 ahead but Armagh fought back to trail by only one point at half-time.

Clarke hit seven of Armagh's nine second-half points but it was not a one-man show by the Crossmaglen star.

Stephen Harold shone in midfield for the majority of the contest while Clarke received tremendous support in attack from Stefan Campbell.

Aaron Findon also performed well in midfield in the first half before being black carded while substitute Eugene McVerry also made a big impact after his introduction.

And McEvoy also deserves great credit for regrouping after his first-half howler and, indeed, the keeper made important saves either side of the mistake.

McEvoy made a great early save to deny a goalbound Stephen Bray shot before Meath custodian Paddy O'Rourke excelled to deny Clarke at the other end before the Crossmaglen man levelled the contest at 0-2 to 0-2.

There was a suspicion that the roof might fall in on Armagh performance when McEvoy allowed Newman's weak shot to pop out of his grasp and into the net as Meath moved five ahead.

Armagh responded with three unanswered points with impressive trio Campbell, Harold and Caolan Rafferty on target but the Orchard men looked to have received another body blow when Newman palmed in another goal after McEvoy had bravely saved Bray's point-blank effort.

However, Armagh outscored Meath 0-5 to 0-1 during the remainder of the first half, courtesy of four Clarke points and a Harold effort.

At 2-5 to 0-10 down and with a wind advantage to follow, Armagh looked in a good position but they had an escape at the start of the second period as a Newman shot came back off the crossbar with McEvoy beaten.

Meath looked to have wrested back control again as two Newman points and an Eamonn Wallace score extended their lead to four but Armagh fought back thanks to two more Clarke frees.

Another Wallace point left Meath three clear again but the home team's lead was trimmed back to the minimum by the 54th minute after two more Clarke frees.

The suspicion that it might not prove Armagh's night reared its head again when the lively Campbell saw a goal attempt come back off the foot of an upright with O'Rourke beaten.

But Armagh refused to let such thoughts enter their head and they took the lead for the first time in the contest on 62 minutes after points from Rafferty and the jinking McVerry.

Clarke fired Armagh's three remaining points to bring up his total to 0-11 and with Meath only managing one point in the final 20 mintues of action, Paul Grimley's side clinched a victory which was greeted by understandable jubilation in the Orchard ranks after the injury-affected opening to the league campaign.